EC W: Orange ladies wrap it up in Apeldoorn with yet another 3:0 win

Though the Dutch Volleyball women knew a false start in the first two sets of their last match of the European Championship qualification round in Apeldoorn, the squad of Gido Vermeulen did not lose a set in the end. The number 3 of Pool B, Greece, was sent home with a 25-20, 25-23 and 25-13. 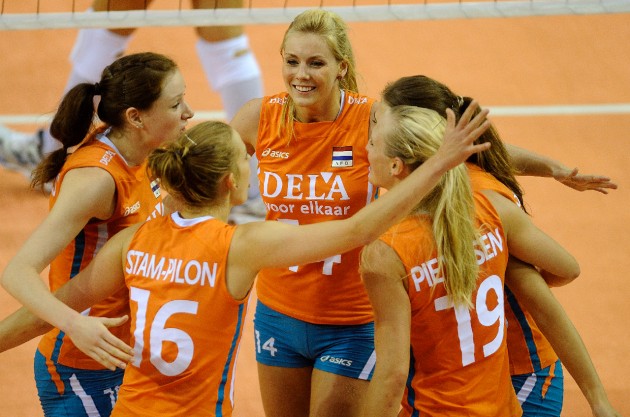 “Greece did not start well in this tournament, but grew up in the last two days. They put pressure on us with their services in the first two sets. In the closing set, we managed to put the pressure on them and that directly sorted result. We leave to Ukraine next week with the best possible result, and that gives us a lot of confidence”, stated Vermeulen after the match.

After a 1:6 arrear, an ace of Laura Dijkema, who was honored for her 100 caps before the start of the match, brought the lead to the home team for the first time (7:6). Via an ace of Evangelia Chantava, Greece reached a lead of 8:11. A few minutes later, Dijkema managed to even the score again (17:17), after which the women in orange created a margin that was steadily built out. Team captain Debby Stam-Pilon finished the first act with a fierce smash.

After an arrear of four points (1:5), the Dutch approached again and after two unforced Greek errors, the Netherlands reached the first technical time-out with a two-point lead. At 17:15, Dijkema was substituted by Kim Staelens, but she could not prevent the Greek from coming back and detaining the lead up to 22:23. Two strong services of Pietersen who scored 17 points today, brought the home team to their first set point, Greek libero Eirini Kelesidou unwillingly ended the second set.

In the closing act, the Netherlands managed to put pressure on Greece immediately. Within a few minutes, the scoreboard displayed 13:1. The “Orange” side clearly found back the rhythm it had displayed against Ukraine. At 15:4 Quinta Steenbergen substituted Wensink, at 7:18 Vermeulen brought in Angelique Vergeer for his team captain. The margin was never less than nine points, and a Greek ball on the net finally ended the last match of the European qualifier in Apeldoorn.

WL M: Iran’s captain – It’s one of the best days of my life