EC W: After first day of action in Israel standings remain very close in Pool A 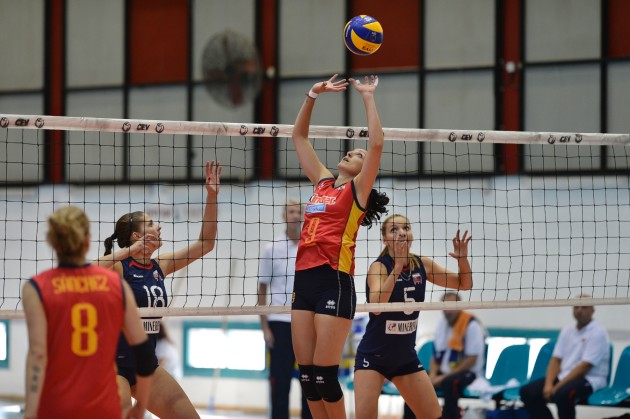 Slovakia started well in the opening set going up 8:3 but Spain woke up and eventually drew level at 14 with a spike by Ana Mirtha Correa. A real close race started after that with Spain finally sealing the set with the score of 26-24. Slovakia got to the front in set 2 after the first technical time-out and Spain could not find a way to respond to their good play, so that the provisional 1:1 was finally there. Spain returned to the front in set 3 (8:6, 16:13) and never looked back with Diana Sanchez finishing it off at 25-20. After a close start, Slovakia moved to the front in set 4 (12:7, 18:12) and eventually finished it off at 25-17 calling for the tie-break. Spain opened there with a 3:0 that forced Slovak head coach Miroslav Cada to call a time-out and he eventually succeeded in providing his players with the right tips, with Slovakia going up 8:6 and 10:7. Slovakia needed only two more points as Tatiana Crkonova spiked for the 13:10 but Spain stormed back and with some great actions in defense could eventually pocket that valuable 3:2 win at 17-15.

“It was a great match played with high intensity and we saw some high-quality Volleyball. We won because the girls showed some real fighting spirit and played with glowing hearts. We have to believe in our chances and tonight I am very happy” said Spain’s head coach Francisco Hervas.

To stay in contention for a European ticket, Israel needed to score a clear win against Sweden and the home heroines eventually did so as the match was attended also by Sweden’s Ambassador in Jerusalem. Israel started out with an 8:4 lead in the opening set but Sweden came back at 8:7; however, Israel went up once more via Tatiana Artmenko (12:9, 15:12) but the guests were able to keep the score close (21:20) before Israel closed it out with a splendid run down the final stretch (25-21). Sweden came out strong in set 2 (9:7; 11:7) before Artmenko and Elvira Kolnogorov brought Israel back on track. The home heroines fought their way back tying the score at 17 and then going to the front (21:18), eventually finishing it off at 25-22. Israel dictated the pace of the game all the way through in set 3 (9:5, 16:10) and even though Sweden attempted a late comeback the Israeli twins Anita and Karen Gluck finished it off for the home side (25-17).

“I am very happy with the result and the girls played excellent Volleyball today. Everything remains open in the group and I hope we make it to the final round by playing well also in the next matches” said home mentor Arie Selinger.

“It was the best game so far for my team and this shows we need to play more matches with strong opponents to improve and make it to the next level” stresses Swedish mentor Tina Celinder-Nygren.

CZE M: Ostrava ready to welcome back top Volleyball after more than 10 years

CC M: Results from the second round

FIVB W: Russia and Japan are the...