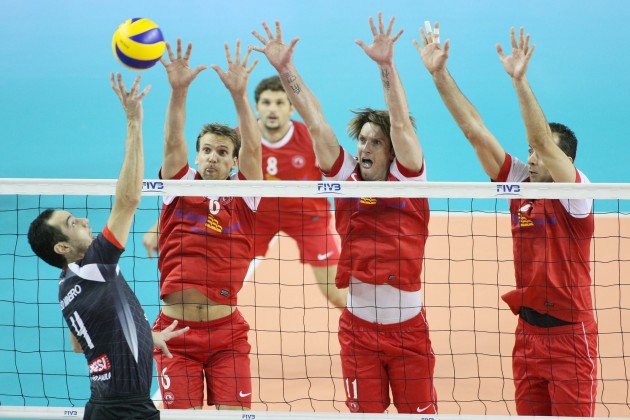 When the format was reintroduced in 2009, the club championship idea had lain dormant for 15 years – the last women’s competition had been held in 1994, while the men had been on hiatus since 1992. The first step was to hold a men’s championship, before re-establishing the full double-gender event for the first time in 2010. This year’s competition will be the third edition of what is expected to remain a successful annual event that offers club teams a unique opportunity to participate in truly global competition.

The eight-team field in the 2012 FIVB Men’s Volleyball Club World Championship is divided into two pools of four. Three-time defending champion Trentino Diatec will have a heavy weight on their shoulders as they seek to continue Italy’s dominance of the tournament. An Italian team has won every men’s competition so far.

But Trentino is off the form that saw them win consecutive triple-crowns of sorts, with back-to-back seasons of winning the CEV Champions League, Italian Serie A regular season and FIVB Men’s Volleyball Club World Championship titles. In this year’s Champions League, Trentino managed only a third-place finish and needed a wild card selection to make the world championship.

In contrast, Brazilian club Sada Cruzeiro is riding an upswing in fortunes and is one of the teams facing Trentino in the Pool A round-robin. With just a month to go before the Club World Championships, Sada Cruzeiro triumphed in the Men’s South American Club Championship in Linares, Chile, to secure their ticket to Doha. Earlier in the year they had already established themselves as the top team in Brazil by winning the Superliga title with a 3-1 victory over Volei Futuro. That win gave the squad a measure of payback for their agonising loss in the 2011 Superliga final, when Sesi-SP took the crown – as well as the South American berth in the Club World Championships.

Other established teams hoping to pose a challenge include Skra Belchatow (second in 2009 and 2010), Zenit Kazan (third in 2009 and 2011) and Zamalek ( fifth in 2009). Qatari team Al-Arabi automatically qualified for the last three championships as the host country representative, and has not finished above fifth in the tournament so for. This year, however, they surprised many – especially the fans in Shanghai – by defeating both favourites in the Asian Men’s Club Championship, Shanghai Tang Dynasty and Kaleh Mazandaran, to win the Asian qualification. They therefore enter the 2012 tournament as strong contenders, and have left Qatar to nominate a second team, Al-Rayyan, for the host-country slot.

The other team in the running are relative unknowns from Mexico, Tigres de Nuevo Leon.

The FIVB Men’s Volleyball Club World Championship was staged from 1989 to 1992 with Italy hosting in each year except 1991, when Brazil was the tournament site. Doha has been home to the event since the tournament was re-established in 2009. Italian club teams have dominated the event, all six previous events – Maxicono Parma in 1989, Mediolanum Milano in 1990, Il Messaggero in 1991, Misura Mediolanum Milano in 1992 and Trentino in 2009, 2010 and 2011.

The women’s competition is returning for its sixth edition, and third in consecutive years after a 16-year hiatus. A club from the host country won the first three events in the tournament history – Sadia Esporte Club Sao Paulo won the top prize at the inaugural event held in Sao Paulo, Brazil, in 1991. Il Messaggero Ravenna won the second event the following year in Italy, while Leite Moca Sao Paulo earned the gold medal when the tournament returned to Sao Paulo in 1994. With the tournament’s reinstatement in Doha in 2010, Turkey’s Fenerbahce stood on top of the podium. In 2011 it was Rabita Baku of Azerbaijan that took the prize.

Both Rabita Baku and Fenerbahce are back again in 2012. Fenerbahce has taken the CEV Champions League title already, and their main competition in Pool B will likely be Kenya Prisons, another perennial presence that played in both the 2010 and 2011 tournaments. Lanceras de Catano are newcomers.

In Pool A, Rabita Baku will have to hold off Sollys/Nestle, who will want to complete their collection with gold after taking silver in 2010 and bronze in 2011. Bohai Bank is the first Chinese team ever to take part in the tournament, and will look to make an imperession.

FRA M: The program for the Mistral trophy