WoV in Manila – The story about coaches

Olympic champions, World champions, European champions, Asian champions… They will be all here in Manila, trying to beat one another in the race for the trophy. 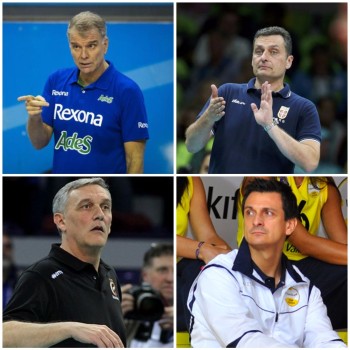 Probably the most famous volleyball coach in the world! Bernardo Rezende won the Olympic gold in Rio 2016 with Brazil men’s national team, while now he will try to bring the first ever club world championship title to his Rexona Sesc.

Some would say that he has accomplished the greatest achievement in 2016 by leading Serbia to the silver medal at the Rio Olympics. Zoran Terzić is a world-class volleyball coach, and Volero Zurich scored a jackpot when appointing him last summer.

He is actually defending the title at the FIVB Women’s Club World Championship, only with a different club. Caprara won the gold with Eczacibasi VitrA in 2015, while now he will try to do the same with Italian powerhouse Pomi Casalmaggiore.

Massimo Barbolini arrives to Manila with the title of European champion, as he led Pomi Casalmaggiore toward the trophy in the CEV Champions League 2015/16 season. During the summer, he actually exchanged jobs with Giovanni Caprara, as he left Italian club to take over Eczacibasi VitrA. Can he help the Turkish giant to become the first ever team to win 2 trophies in this competition?

Another famous Italian coach with plenty of awards in his CV. Appart from creating a real volleyball powerhouse out of VakifBank, Guidetti also left a mark as national team coach, as he led Netherlands toward the silver medal at the European Championship 2015, while the Dutch team finished at the 4th place at Rio Olympics under his command.

He has already made history in Thai volleyball by making Bangkok Glass the first ever club from Thailand that won the Asian Club Championship. Also, Kittipong Pornchartyingcheep claimed the two consecutive domestic titles with his club.

The only women at the position of head coach here at FIVB Women’s Club World Championship 2016. Kumi Nakada won the Japanese Championship with Hisamitsu Springs in the previous season. Her work is extremely appreciated in Japan, and that proves the offer to take over the Japan women’s national team.

A very experienced volleyball coach, who has worked in many countries throughout his career. Branislav Moro was volleyball head coach in Serbia, Greece, Romania, Tunisia, Saudi Arabia, Kuwait, Libya, Belarus… Before arriving to Philippines, he was the head coach of North Korea women’s national team.