Eczacibasi VitrA are the very 1st team to win two FIVB Women’s Club World Championship titles, while on top of that they claimed the precious prize two years in a row! In the big finals of the 2016 edition, the Turkish powerhouse downed European champions Pomi Casalmaggiore in four sets. 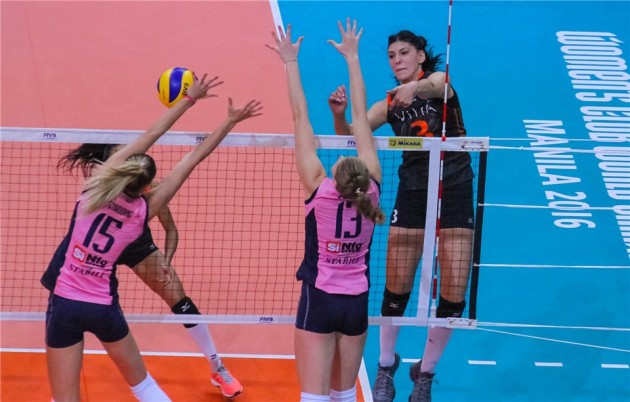 Zurich 2015. Manila 2016. Two years in a row the trophy for the best women’s volleyball club in the world is going to Istanbul, to the cupboard of Eczacibasi VitrA! The Orange squad arrived at the tournament with the role of the main favorite, and they confirmed down on the court that they are indeed the best team in the world at this moment.

Still, we had quite a thriller in Mall of Asia Arena. After taking the lead by winning the 1st set, Eczacibasi VitrA faced a shocking start of the 2nd set. Pomi Casalmaggiore opened that period by 7:0 lead and eventually tied the overall score by clinching the 2nd set – 25:19.

Eczacibasi VitrA then increased the pace once again and claimed the 3rd set by 25:19, but Pomi Caslmaggiore answered back and tied the score again by taking the 4th set – 25:22.

Finally, it was the Turkish side which prevailed in the tie-break. At the score of 12:11 for the Orange squad, Tatiana Kosheleva made a point for 13:11, then Jordan Larson made her trademark “tip” to increase the lead of her team to 14:11, while at the end Tatiana Kosheleva scored an ace for 15:11 and 3-2 in sets for Eczacibasi VitrA.