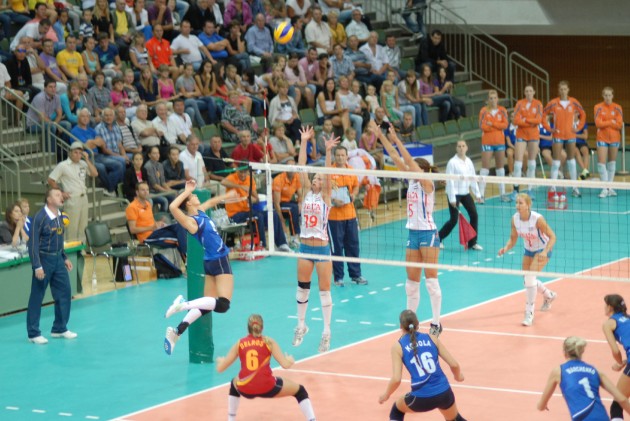 The Netherlands caught a splendid start (5:1, 14:9) but supported by the noisy local crowd, the Ukrainians fought back and even went to the front with the slimmest margin by the second time-out (16:15). After that Ukraine scored three points more and even though Dutch coach Gido Vermeulen asked for a break, he did not succeed in stopping the run of the home side that won the opening set with the score of 25-20.

Vermeulen changed his setter in set 2 with Kim Staelens replacing Laura Dijkema and this move proved to be successful as the Netherlands pocketed that section of the game with a margin of 6 points. The Orange ladies stretched their momentum to set 3 going up 8:2 and even though Ukraine closed the gap to -3, still the Netherlands could go for the 2:1.

Ukraine stormed back in set 4 helped by their fans and Nadiya Kobola killed two attacks and added one ace to move her side up 16:12, before eventually wrapping it up at 25-18.

High-quality Volleyball was to be seen in the tie-break where the Netherlands moved to the front but Ukraine stayed tuned (11:10); powered by Debby Stam-Pilon, best scorer of the day with 22 points, Holland forced Ukraine’s coach Andriy Romanovych to call his second time-out at 13:10 but a few moments later the guests could celebrate their victory.

“Ukraine played superbly today and it was difficult for us to win this game. I think they have a good perspective and a bright future” said the Dutch captain, Stam-Pilon.

“It was an interesting and nice game. I am proud of my girls because they fought to bring it home. As for our opponents, I think Tetyana Kozlova is a great player, very eclectic, but I also like Maryna Marchenko and Nadiya Kobola, they all played very well” said Dutch mentor Gido Vermeulen.

“We played a world-class opponent and we can be happy with today’s result, as our team is still being built. We made many errors because we do not have the necessary experience at this level, for the moment” stated local mentor Andriy Romanovych.

“We fought for the win and this is important. We did not let fall any easy ball and I think we did show a good game. Thanks to our opponents from the Netherlands because they showed us some high-class Volleyball. Our goal must be to play as well as they do” commented Ukrainian Iryna Trushkina.