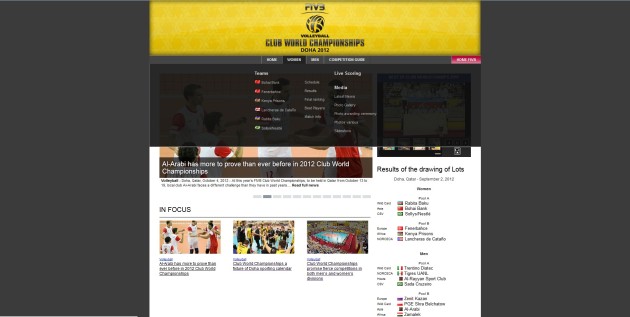 The usual big clubs with rosters heavy on well-known international players are back to challenge for the annual title, and several have strengthened their squads further. Some upstart teams have also made interesting additions to their lineups in the hope of making a big impression at the Club World Championships.

For 2012, Brazilian powerhouse Sollys/Nestlé has brought in Sheilla from Unilever and Gabriella from SESI-SP. They join fellow London Olympic gold medallists Jaqueline, Adenizia and Thaisa on this year’s team. Sollys also gained the talents of Fernanda Garay from Volei Futuro and Dani Suco from Minas Tenis Clube.

On the men’s side, Zenit Kazan added USA’s Matthew Anderson to their lineup with the departure of William Reid Priddy. The core of the team remains their Russian Olympians, however – players like Alexander Volkov, Nikolay Apalikov, Yury Berezhko, Alexey Obmochaev and Maxim Mikhaylov.

Sada Cruzeiro’s main addition for 2012 is wing spiker Yoandry Leal, one of Cuba’s leading national players in recent years. He joins the team’s stalwarts – William, Filipe, Serginho and Wallace, to name a few – on what is sure to be a dangerous team to play.

Trentino will travel to Doha with essentially the same team that won the competition in 2011. There has been no change to their starting six of spikers Osmany Juantorena and Matey Kaziyski, middle blockers Emanuele Birarelli and Mitar Djuric, opposite Jan Stokr, setter Raphael Vieira De Oliveira, and libero Andrea Bari.