In the second round of the Russian League Zenit Kazan defeated Grozniy Grozniy 3:1. Read more about latest volleyball news, games reports, and statistics on WorldofVolley. 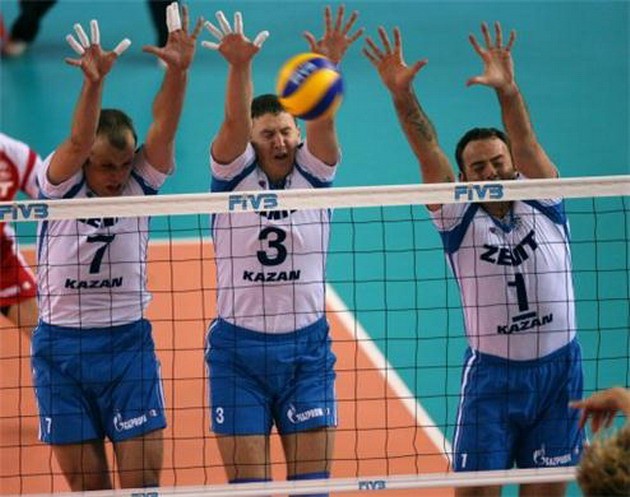 Zenit quality starts to impact only after the second technical break. Guests are not much respected favorite, they played well, Sivozhelez was effective in attack (16:13), and then from 17:15 transforming to 21:15.

In the second game Grozny demonstrate impeccable game in defense, offsetting these persistent errors in the attack. Time after time, they raise the tempo of the first attack in the performance Apalikov and Alexandar Abrosimov. Failure to attack makes Alekno raise his voice at the break and throw in Anderson. By this time, “the Terrible” has wins back behind four points – 18:18. Sergey Rykov from Kazan closes, but the nimble Makar Bestuzhev permanently clears out of hand. Courage to take the party guests from the champion.

In the third game on the court found the two friends – Igor Kolodinsky and Dmitry Barsuk, Bazooka and Bars, a couple who have achieved a lot of big victories in beach volleyball. Anderson made Kazan lead 15:9. Two consecutive errors Maxim Mikhailov and there was (19:16), but Abrosimov takes questions about the winner set – 24:19.

Zenit continued to play well in the fourth set. Anderson puts the ball in the zone of conflict – exactly between Barsuk and Bestuzhev  (13:8). Yury Berezhko was good in the attack, and so he was the most effective player of the game. He has 15 points. Captain Mikhailov makes another ace (19:13), and Anderson brings “Zenith” victory. “Terrible“, despite the defeat, left the most pleasant experience. With such a dedicated team is fully capable of playing a high level of game.

Alexander Serebrennikov, assistant coach of the Zenit: “I liked the “Grozny“. The guys played with great desire and fought for every ball. Commendable. Sure, we could win and 3-0, but a little busy playing in the second set, opponent took advantage”.

Difficult training session – This is how...