Belgorod Belogorie lost to Lokomotiv Novosibirsk at home with 2:3 in the second round of the Russian League. Read the latest news from Russia on Worldofvolley.com. 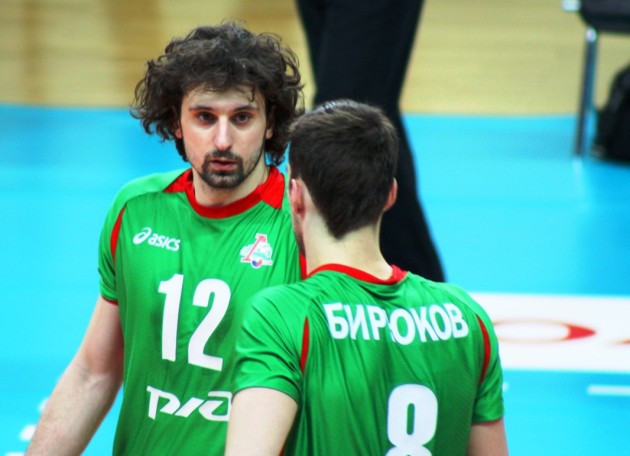 Meeting two rivals did not disappoint the expectations of many fans and gave the audience an exciting five-set match. Belogorie spared no effort to please their fans, but the trauma of the leading players and mistakes at crucial moments of the meeting resulted in “lions” to a second home defeat.

Looked much more confident in the second match for the “Belogorie” diagonal Grozer was less wrong on the pitch, which, together with a confident game on the block helped “lions” fast enough to make a comfortable reserve in the account. The guests are often not connected to the attack, their outside hitter was not very effective, but the Swede Nilsson regularly collect its points not only on offense, where he in the first half of the match has a very high percentage of the attack, but on the pitch. In the first set he made three ace, the gap to disperse the hosts and forcing Gennady Shipulin take the time out. However, giving the compelling impact Muserskiy restored difference in the score – 22:17. Grozer block an out-finished set in favor of the “lions” – 25:21.

After quite confident to win the game Belgorod allowed opponents to seize the initiative. Noticeable was Khtei, Grozer began to make mistakes, the Lokomotiv was harder to block Tetyukhin, he has plunged efficiency in attack, which is bound to be reflected in the account. The Lokomotiv teamworked almost flawlessly Butko – Nilsson, and Biryukov in block. Guests confidently bent his line, relentlessly increasing their advantage.

In the third set was a close contest in the point to point, which seemed to have ended in favor of the home when the output is allowed to Ilyinykh to make a three-point spurt – 17:14. But Andrey Voronkov immediately took a timeout, after which the Lokomotiv scored 5 points in a row – 17:19. The last two points brought Novosibirsk Gutsalyuk blocking Tetyukhin .  It was only after the second break Belgorod no longer make mistakes. Tetyukhin still scored block an out, and then read Grozer combination and made chic – 19:19. Muserskiy, blocking Nilsson again brought Belogorie forward – 20:19. At the next ball Nielsson said its discount Grozer – 21:20, and it was the last moment in the game when the home team were close to opponent. Lokomotive equalized, and then Volvich, catching Muserskiy, brought visitors ahead – 21:22. Muserskiy and  Ilyinykh three equalize, but rivals have played virtually error-free and at the first opportunity had a decisive counterattack.

Guests to kick-start and fourth set, forcing Shipulin reshape his team, sending players in the box spare. Head coach Belogorie added and damage sustained by the Tetyukhin. Khtey replaced veteran and Russian composition Belogorie gave chase for the more advanced rival. The chase was a success, and the second technical break Lokomotive has lagged behind the “lions” on three points. Tired and started to make mistakes Nilsson increasingly began to raise his punches in Ermakov. Zhigalov brought the team score in the attack, and on the block. Guests finished off two attacks Khtei  – 25:19.

The tie-break due to injury lost another player – Ilyinykh. Kosarev well into the game, and Belogorie twice recoup two-point gap with the Lokomotive. Makarov started to address the transfer Kosarev and two strikes most experienced “lions” even brought Belogorie forward – 9:8, but his third strike softened block and Birbkov earned Extremely urgent for Lokomotive point – 9:10. Kosarev scored again and again Zhigalov had a chance to bring the hosts ahead, but he was wrong when you hit the rolling ball, sending it out. Immediately followed by another error from the host, and then another one, the fifth on a tiebreaker, and the visitors had four match points – 10:14. Muserskiy played one point, Zhigalov did ace – 12:14, but in the next drawing Lokomotive earned the victory point.

The most productive of the winners was Nilsson – 28 points.

Gennady Shipulin, head coach of the Belogorie: “Today, the team played better than in the first game, and yet it was not enough to win. I think I still need to search for who will be the main position, Kampa or Makarov. Today, the team looked more lively with Makarov. So far we are doing too much of their unforgivable mistakes. However, do not be upset. We’ll play on, we will work – we have a bench. Today, the whole team played, but not all players have the strength – were back problems, Sergey Tetyukhin, was damaged Dimitry Ilyinykh“.