China won against Japan 3:1 in the 16th Asian Junior Women’s Volleyball Championship semi-final at the Nakhon Pathom Gymnasium. They will play against Chinese Taipei for the Asian Jr Women's title.

Reigning champions China, the FIVB world No.1 and the only team yet losing a set to their respective rivals en route to the Monday’s semi-finals, pulled off a dramatic 3-1 (25-17, 18-25, 25-21, 25-22) victory over Japan, the team they had beaten in comfortable straight sets in their Pool F playoffs earlier. 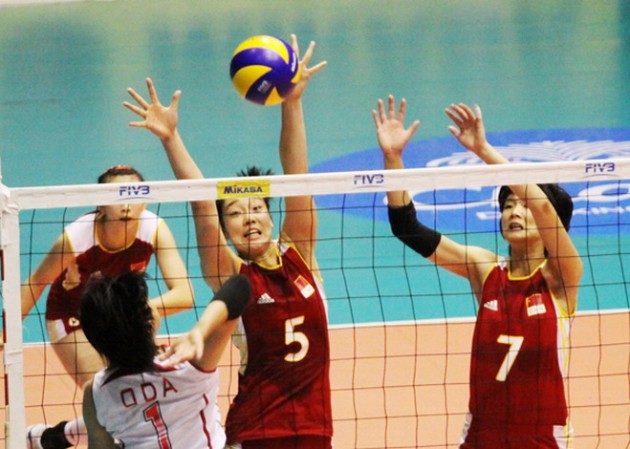 Against the formidable Japanese, China fielded a fully-fledged line-up with the likes of two towering Xu Ruayo and Zhu Ting, who stand 193cm and 192cm tall respectively.

China, which finished third at the last year’s FIVB World Junior Women’s Championship in Peru, opened up aggressively, with hard-hitting Zhu Ting using her height advantage to attack the smaller blockers with her lightning-fast mid-court spikes for the first-set win 25-17.

Conceding one set, Japan stormed back mightily. Momoka Oda and Aya Horie took turns puncturing the Chinese defence with their relentless deadly attacks for the Japan’s commanding 18-15 lead in the second set.

As China set up an impeccable defence from Zhu Ting and Li Weiwei, the fired-up Japan spiked devastatingly from all angles in a determined effort of pulling down the Chinese high wall. From then, the on-going battle thrilled a big crowd at the competition venue with the exceptional skills of both sides. Japan fared better to seal the second-set win 25-18.

Terrific Zhu Ting and Tang Ningya put China back on the right track in the third set, thanks to their sharp spikes which always went unanswered. China took the initial 16-12 lead.

Japan regrouped to counter-attack well and narrowed the gap 15-17, forcing China’s head coach Xu Jiande to ask for time-out to improve his girls’ tactics and techniques. His intention worked out pretty well as China led all the way from then on to win the hard-fought set 25-21.

Japan took the upper hand initially in the fourth set to lead 12-8 before stretching it to 17-9. It was as if the fight would end easily in favour of the Japanese. However, things turned sour for them. China gradually pulled their game together to get crucial points and narrow the margin 18-21 before closing it 22-22.

From then on, it became a clash of the Titans when both sides got up a full head of steam, pouring every tactics they had. As Japan performed a stubborn defence, allowing the rivals’ tough time penetrating, China changed their tactics to rely mostly on effective drops and powerful spikes from the back court. China eventually captured the hotly-contested battle 25-22 and the exhausting 104-minute match.

Zhu Ting of China scored a match-high 28 points, 24 of them from deadly spikes, while Aya Horie bagged 16 points for Japan.

“I’m very happy that my team beat Japan again. However, I praised them for the improved performance. They came back much stronger in the semi-finals against us,” commented China’s head coach Xu Jiande.

“Actually, we beat them before in Pool F playoffs and we remained confident after the first-set win. However, we did not prepare for the loss and they played much tougher against us in the second set. That’s why we lost in the set. We next take on Chinese Taipei in the final. We already beat them in the playoffs and hope to repeat that feat.”