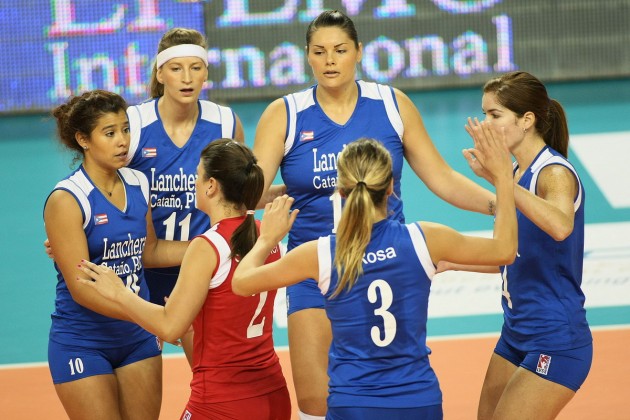 Yarimar Rosa led five Lancheras players with double digits in scoring with 18 points, including three blocks and one ace, followed by Tatiana Encarnacion with 13 all via attacks. Shanon Torregrosa added five blocks among her 12 points while Jessica Jones and Jetzabel Del Valle each contributed 10 tallies.

Kenya held a slight 16-15 advantage in blocks and dominated the aces category 7-2. However, Lancheras gave away only 17 points in errors to 32 by the defeated side.

Lancheras led 8-4 in the first set helped by several sloppy plays from Kenya side. A couple of spikes and an ace by Rosa increased the gap to 16-8 at the second technical time-out. Lydia Mayo and Makuto led a Prisons reaction to cut the distance to 21-16. Block and spike by Jones restored the order at 23-16 and Del Valle closed it 25-19 with a spike down the middle.

Moim blocked and spiked for a Prisons 5-1 lead in the second set. The Africans led 8-5 at the first technical time-out. Maiyo contributed to expand the margin to 16-9 with strong kills but two errors followed by the spike of Rosa forced a time-out from the Kenyan bench with the score 16-12. Makuto hit a thundering shot answered by Jones. At 20-17, Moim hit a bomb and Kisha blocked Encarnacion. Then Lancheras took advantage of various opponent’s errors to tie at 22-22. Moim and Rosa traded kills but Maiyo hit one more spike and Khisa closed it 25-23 for a tie at 1-1.

In the third set, the Puerto Rican Lancheras were in front 8-5 thanks to Torregrosa’s spike and blocking. They improved to 16-8 following a series of wild attacking attempts of Prisons capped by Rosa’s block. Prisons steadily cut the distance to 19-15 behind the offense of Moim but the Lancheras were able to stay alive and take the set 25-19 with Jones and Torregrosa providing the final difference.

The combo of Encarnación and Rosa gave Lancheras an 8-2 lead in the third set but Prisons reduced the distance to 10-7 carried by Jepkoisgei, Khisa and Maiyo. The Lancheras recovered to lead 16-10 with Encarnacion capping the outburst with a cross-court spike. Jones and Torregrosa contributed to increase at 19-11 and Rosa hit a bomb for comfortable 20-11 margin. Kenya was not going to quit easily and came back taking advantage of several errors to cut the distance at 22-20 when Rosa hit an errant spike. Moim blocked Torregrosa for 23-22 and Kenya tied at 23-all with an ace by Makuto. Encarnacion landed one spike for match-point and Lancheras won 25-23 thanks to an opponent error.

TUR W: After missing last final four Vakifbank wants to get the trophy back