Only two middle blockers will enter the 2016/17 WoV Dream Team. The Voting is still on, so grab a chance to support your favorite player! 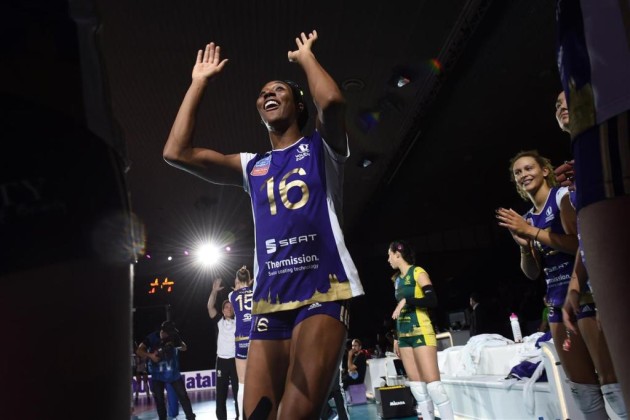 Today, we are presenting you the MIDDLE BLOCKERS:

Foluke Akinradewo (Volero Zurich): She was one of the best players of Volero in the previous season. Constantly good, effective both in defense and in offense, this American middle blocker helped the Swiss powerhouse to once again win all possible trophies in home country.

Still, Foluke and Volero failed to achieve something big at the European stage.

Milena Rašić (VakifBank): This girl is just used to winning major trophies. This year Rašić and her club VakifBank were not so successful in domestic competitions, but they won the two most important trophies – The 2016/17 CEV Champions League and the 2017 FIVB Women’s Club World Championship.

Amazing season, no doubt about that.

Eda Erdem Dundar (Fenerbahce): Eda and her team Fenerbahce had quite an opposite season than Rašić and VakifBank had. While Fenerbahce failed to win any of the European trophies, they won the domestic double by seizing the Turkish Championship and the Turkish Cup.

And, Eda Erdem Dundar was very involved in winning both of those trophies.

Rachael Adams (Eczacibasi VitrA): She could have easily won more trophies this season, but eventually Adams finished the 2016/17 campaign only with the gold medal from the 2016 FIVB Women’s Club World Championship.

Still, she has been one of the best players of Eczacibasi VitrA during the whole season and therefore deserved to be among the candates for the 2016/17 WoV Dream Team.

Juciely (Rexona-Sesc): Brazil is the land of volleyball and when you are playing for the country’s top club then it means that you are really good in this sport. And, Juciely is definitely really good in volleyball.

Robin de Kruijf (Conegliano): If she had not suffered that late season injury, Conegliano might have won some of the major trophies in the 2016/17 campaign. Simply because the Dutch middle blocker was very important for her team in the previous season.

And when De Kruijf was in her best shape in the last season, Conegliano won the Italian Cup.

CHN M: Savani – Made in China