Brazil and Germany will clash in the finals of the 2017 Women’s Montreux Volley Masters in Switzerland in a rerun of their pool battle in which European side prevailed. 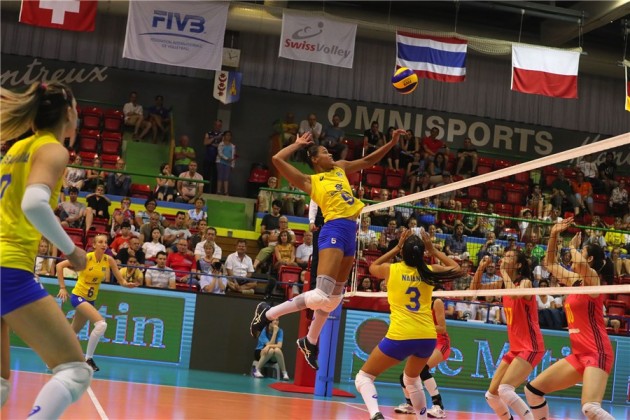 German National Team saw off the only undefeated side in the tournament Argentina in a semifinal game in which every single set was highly competitive 3-1 (25-27, 25-19, 27-25, 25-19). Bundesliga champion with SSC Palmberg Schwerin, opposite Louisa Lippmann, scored 22 points for the German ladies while a 20-year-old Argentinian prospect playing as a receiver with San Lorenzo, Elina Rodríguez, scored 23 on the other side.

In a clash of the titans, Brazil outplayed Olympic gold medalists and Montreux title defenders China in the other semifinals, taking revenge on Asian side for a painful defeat in Rio last summer. Although this encounter ended in four sets as well, Brazil dominated in at least two of them, 3-1 (25-17, 25-22, 27-29, 25-16). Camponesa/Minas receiver Rosamaria Montibeller and Vôlei Nestlé/Osasco star Tandara Caixeta, both extending contracts with their respective clubs for 2017/2018, topped Brazil with 22 points each. In addition, Ana Carolina Silva ’Carol’, a new player of Turkish Nilüfer Belediyespor, made 7 kill blocks, while her team had 17 overall. Gong Xiangyu, young opposite of Jiangsu, noted 20 for China.