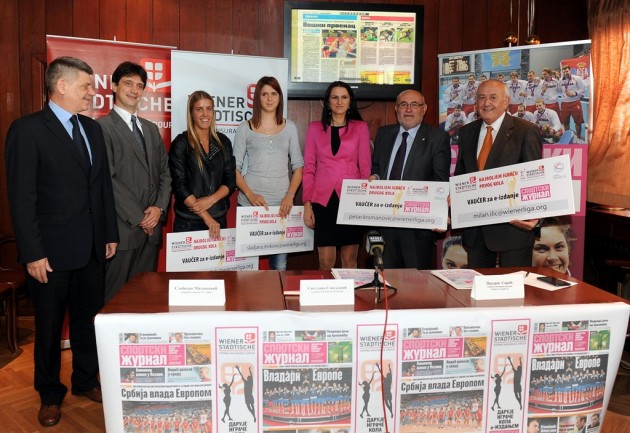 That ceremony took place in the premises of a restaurant located on the fifteenth floor of a building known as “Politika” and was attended by players, media, and representatives of the clubs as well as of the “Wiener Städtische”, who were joined by Mr. Zoran Avramovic, Marketing Director of the Volleyball Federation of Serbia, Mrs. Ana Avramovic, Vice President of the Association regrouping all clubs competing in the first division, and Competition Commissioner Cedomir Nedeljkovic. The agreement was signed by Mrs. Svetlana Smiljanic, member of the Executive Board of the “Wiener Städtische” Insurance Company, and Predrag Saric, Editor in Chief of “Sportski Zurnal”.

After the presentation of the electronic edition of “Sportski Zurnal”, Mrs. Smiljanic presented the awards to the best players nominated after the first two rounds of the national league, and namely Sladjana Mirkovic, setter of the club Vizura Wall Art BEOGRAD, and Bojana Martinovic, who plays as outside hitter for the Volleyball club Jedinstvo. As for the men’s competition, Milan Ilic – setter of Radnicki KRAGUJEVAC – and Petar Krsmanovic – a middle blocker included in the roster of Djerdap KLADOVO – were the winners of that award.

“This is an excellent agreement between three successful organizations, the “Wiener Städtische” Insurance Company, the “Sportski Zurnal” and the Volleyball Federation of Serbia. This is very important for our young players who will surely feel reassured in our intentions to further develop our sport and provide new means for its promotion” said Slobodan Milosevic, Secretary General of the Volleyball Federation of Serbia.

RUS W: Kosheleva and Ulanova are back in Kazan