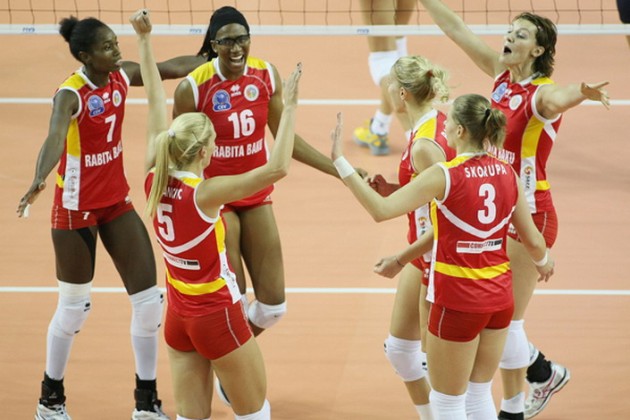 The venue of this clash will be the “Sarhadchi Olympic Center” in Azerbaijan’s capital city where Rabita will celebrate its home debut after finishing second at the 2012 FIVB Club World Champs in Doha, Qatar, losing there the final match to Sollys/Nestlé OSASCO of Brazil, a side whose roster includes five gold medalists from London 2012.

This season marks the third appearance of Rabita in Europe’s most elitist competition, after the club finished second two years ago. This time, some more international stars – such as Angelina Hübner-Grün, Madelaynne Montano and Foluke Akinradewo – have been signed to bring that much wanted trophy home and the team is placed under the guidance of Marcello Abbondanza. It will be a very special match for the Italian-born head coach who had mentored VILLA CORTESE up to this past April before he moved to Azerbaijan. “I am very happy to have moved on and have the opportunity to coach such a strong group, and hope this season will bring much success to Rabita” he says.

“This is our first home match of the season and we evidently want to give our fans something to cheer about” adds Serbian captain Mira Golubovic.

Rabita and VILLA CORTESE successfully debuted this week in the Champions League by edging Agel PROSTEJOV and Atom Trefl SOPOT respectively in the first round of play. Rabita tops the charts of the group having downed the Czechs in straight sets while the Italians needed four sets to cruise past Poland’s national champions.

ITA M: Serie A round 4 preview

BRA M: Sidao Gets Into A Fight