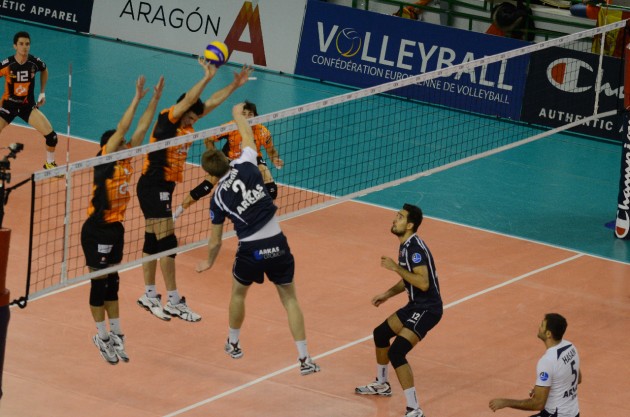 The match was played in a fantastic atmosphere at “Los Planos” sports pavilion with the game being very close in the early phases of the first set (8:7) before CAI TERUEL got momentum and went up 16:10. Arkas reception just did not work and even though the guests were able to claim some more points, eventually CAI TERUEL pocketed the final 25-19.

The second set started out with another close fight (7:8) with Arkas gradually finding its pace (14:16) and even though the local heroes drew level at 16, it was Arkas that at the end of a very exciting battle finished it off at 23-25.

Arkas stepped up the quality of its play in set 3 having constantly a margin of five to six points and comfortably cruising to the final 19-25.

The fourth set was very dramatic, with Arkas enjoying a lead of 2 points for most of the time before CAI TERUEL flipped the charts around just by the final stretch (20:19) pulling out a splendid 25-21 to call for the tie-break.

There CAI TERUEL got up 8:7 before Arkas scored three in a row and showed great composure to claim that much wanted second consecutive win wrapping it up at 11-15.

Liberman Agamez top scored for the Turkish side with 33 points while three players – Parres, Torcello and Barcala – chartered 15 for TERUEL.

Arkas head coach Glenn Hoag praised the home side and especially their reception and block while home mentor Oscar Novillo pointed out the importance of this result to keep on working and improve for the next matches.

WoV Coach Of The Year: Can anyone...