After losing to Asseco Resovia RZESZOW and Bre Banca Lannutti CUNEO, France’s rookie Arago de SETE does not have any other option than to edge Remat ZALAU in the next round in order to keep alive some chances to continue its campaign in the 2013 CEV Volleyball Champions League. Read latest volleyball news on Worldofvolley.com. 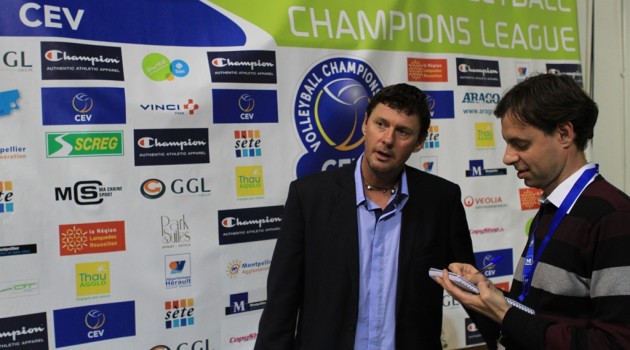 In the national league this side has performed pretty well so far being in the top three of the charts and Arago was even quite close to cause a sensation in the first CL home match with Asseco Resovia RZESZOW before eventually losing 1:3 as the guests from Poland could profit of their class and experience in the deciding phases of the third and fourth set.

However, via this performance head coach Patrick Duflos and his players did realize that the gap from Europe’s elite is not that big and a confirmation of their quality came one week later as they played Bre Banca Lannutti CUNEO in Italy. The Frenchmen were up 18:13 and 16:9 in set 2 and 3 respectively but were unable to bring it home as CUNEO got back on track via a series of great serves contributed by their young setter Nimir Abdel-Aziz.

On Thursday, as they play their second home match of the season, Arago de SETE will test out the skills and quality of Romania’s Remat ZALAU, a side that has suffered two 0:3 defeats so far in the competition. However, Arago will be significantly sidelined by a series of injuries; with Frédéric Barais already out for about one month because of some back problems, two more spikers got recently injured, namely Milan Bencz and Junot Mistoco. Bencz has a calf wound while Mistoco ruptured his Achilles tendon and hence they will be both out for eight weeks.

Struggling with this situation, this past Friday Arago de SETE lost its first match in the national league to RENNES Volley 35, so things do not look that easy before the home clash with Remat ZALAU.

POL M: Wojciech Ferens: what does not kill you, it will strengthen you

FRA M: Cannes qualified for the next...