This coming Thursday Tomis CONSTANTA will try to claim its first win in what is the absolute debut of Romania’s club in Europe’s most elitist competition, the CEV Volleyball Champions League. They play against Fenerbahce Grundig ISTANBUL. Read latest volleyball news on Worldofvolley.com. 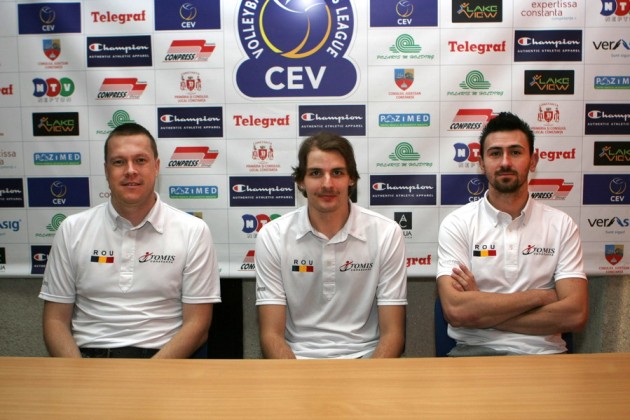 The match with Fenerbahce Grundig ISTANBUL is extremely important for both sides as these teams still have to take their first points in the competition. The young stars signed this year by Tomis, i.e. Olli-Pekka Ojansivu, Milos Terzic and Marko Bojic, will be trying to stand the experience and quality brought to Fenerbahce by accomplished players such as Ivan Miljkovic, Matej Cernic or Leonel Marshall.

Many fans are supposed to come to the local sports hall in Constanta in order to cheer on the local heroes who were assigned by the DOL to an “iron group” including real standouts like, for instance, Dinamo MOSCOW and PGE Skra BELCHATOW.

“This Thursday we’ll be playing against one of the best European teams” says Tomis head coach Radovan Gacic. “This match still represents a good opportunity for us to score our first win. In order to achieve our goal, we need to put much pressure from the serving line and be capable of blocking the attacks of their most dangerous spikers”.

On Monday a press conference was organized in Constanta especially to draw additional attention to the upcoming match with Fenerbahce. “It will be a difficult game because Fener is a great team but we are ready to fight” said Ojansivu. “In my opinion Miljkovic is the best diagonal player in the world; I know him since the time we both played in Greece and also from previous experiences with the national team”.

“The two games with Fenerbahce are a good opportunity for us to claim our first win in this competition” adds captain Dan Borota. “They haven’t been playing that good in recent times and hence we want to win that match on Thursday. The support of our fans is extremely important and I hope as many as possible – like for the match with PGE Skra – will come to the sports hall and cheer on us”.

WL: UNBELIEVABLE! Another injury in Bulgaria!