Both 2012 Club World Champions back in league action

Trentino Diatec and Sollys Nestlé, men’s and women’s champions in the 2012 Club World Championships in Doha, Qatar, were back in league action over the weekend. This and other volleyball news read on Worldofvolley.com. 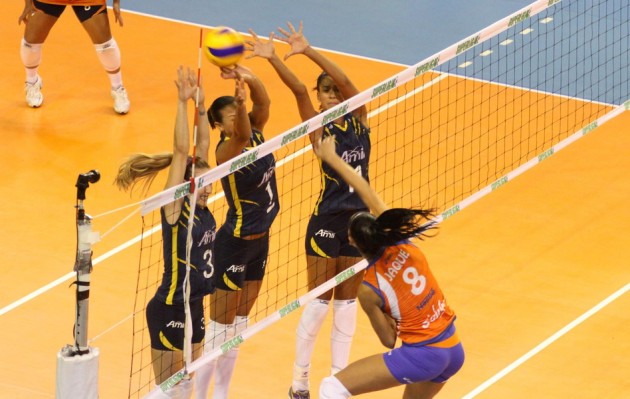 Trentino continued their winning ways in the Italian Serie A with a 3-0 victory over Castellana Grotte, while in Brazil Sollys stumbled in their Superliga opener – losing 1-3 to Amil Volei.

Trentino had some difficult moments in their match on Sunday, but were led out of them by Osmany Juantorena, who played his usual dominant game and came through with vital points when his team needed them most. Flavio Gulinelli’s Castellana squad played well, and probably deserved to win at least one set, but they were up against a team that keeps constant pressure on their opponents and punishes every mistake. After 85 minutes, Trentino had won all three sets, 25-22, 25-18 and 27-25.

“We tried, we fought ball on ball but there was nothing to do,” said Castellana’s Giulio Sabbi. “We are sorry because we deserved something more but I think this game can give us more confidence to do better in the next rounds.”

“Today’s win wasn’t pretty, but what matters is the result and we are glad we won this difficult match,” said Juantorena. “We are a little tired but we knew from the beginning that we had a lot of commitments. We’re going ahead and taking it game-by-game.”

The game to watch in the opening round of the women’s Superliga on Friday was the championship rematch between Amil Volleyball and defending champions Sollys Nestlé at José Liberatti in Osasco. It would be an upset loss for Sollys, who managed only one set in a 26-24, 11-25, 25-14, 25-18 loss.

Amil setter Fernandinha was voted the best player on the court, taking home the VivaVôlei trophy.

“Taking three points, against this team, is a very important victory for us to start off our season,” said Amil’s Fernandinha, a gold medallist at the London Olympics this summer. “We never imagined it – we were just hoping to force them to a tie-break. But now, we see our potential and we will believe in ourselves even more. This could be a great Superliga for us.”

“We didn’t play our usual game,” said Sollys’ Thaísa Menezes. “We committed too many errors. We were rushing the ball and did not have patience. And the other team played us just right. But we cannot despair, as we showed what we can do in some moments of the game. Now we just have to think about winning our next match.”

POL M: Sebastian Swiderski before the visit of ZAKSA in Kielce