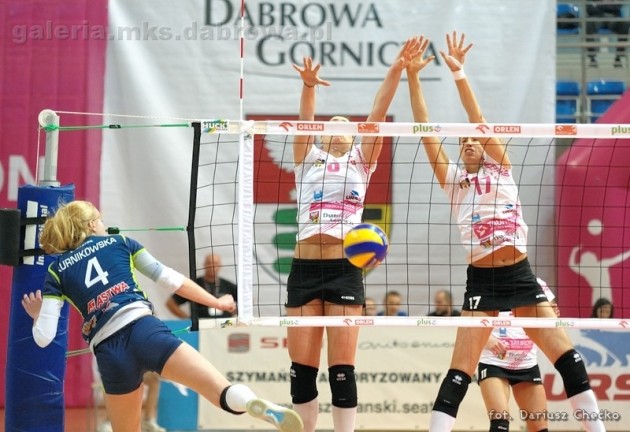 The guests from Bialystok had traveled to Dabrowa Gorniza with only seven players ready to play as many of their members are struggling with injuries and sick. “It is always a pleasure to come here as I feel I have a close and special relationship with this place” says Natalia Kurnikowska, who previously played for Tauron MKS. “We are being confronted by a critical situation with all these missing players but I am doing my job and trying to make the best out of it”.

In the next round Tauron MKS DABROWA GORNICZA will play Atom Trefl SOPOT before having a short break to re-charge their batteries and head into a busy second half of the season, with the finals of the national cup coming up in March, the prelims of the national league and the CEV Volleyball Cup. “We are very happy because our libero Krystyna Strasz is back in action after being out for about one month due to injury” says head coach Waldemar Kawka. “With her return we have been playing in a totally different way, with the consistency and quality of our defense having significantly improved”.

After losing to Eczacibasi VitrA ISTANBUL in the last round scheduled for the prelims of the 2013 CEV Volleyball Champions League, Tauron MKS was moved to the Challenge Round of the CEV Cup to play there another standout from Turkey, Fenerbahce SK ISTANBUL. “I think this is most probably the strongest opponent we could have been assigned to. Berenika Okuniewska is playing there but the group is filled up with international stars. Of course it won’t be easy but we shall not be afraid and play our game” concludes middle blocker Aleksandra Liniarska.