PGE Skra BELCHATOW lost to a group of “Polish internationals” in a match that was played with a totally different formula and ended up in a 3:5 defeat for last year’s silver medalists in the CEV Volleyball Champions League. Read the latest news from volleyball world on worldofvolley.com. 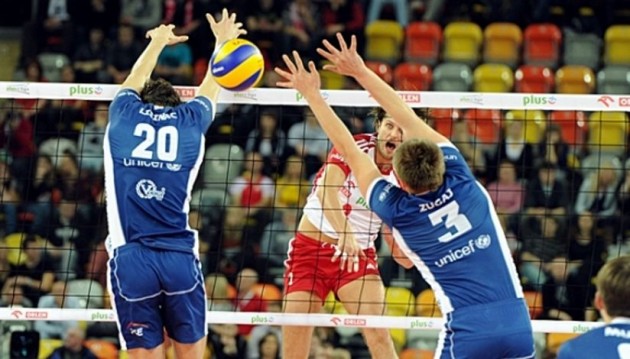 It was probably the first ever Volleyball match played according to the format „best of nine”, i.e. the winner is the team that wins five sets first. The formula was invented and suggested by Polish Volleyball Federation (PZPS) President Miroslaw Przedpelski but it remains very difficult to judge the system after this exhibition game. The match was full of jokes including libero attacks from the back-row, attacks with… the head, and other tricks. Also some actors and Poland’s best tennis player, Jerzy Janowicz, joined the game for the likes of PGE Skra BELCHATOW. Janowicz, who stands at 202 cm, was the biggest surprise of the ATP World Tour these past months; he scored four points and signed more than a thousand autographs.

“I really enjoyed a lot playing Volleyball in such a good company. PGE Skra plays its Champions League matches in my home town, Lodz, and I got some chances to see the guys at Atlas Arena” stated Janowicz with a bright smile.

The main aim of the match was to raise funds for starving children in Chad. The action of UNICEF, promoted by PGE Skra, got a huge support from the fans and the participants. “It is another confirmation that the start of our cooperation with PGE Skra was a great idea” says Marek Krupinski, the head of UNICEF Poland. Also Andrea Anastasi, the head coach of the Polish national team, was impressed by the atmosphere of the show: “It was unforgettable, a great experience filled with joy”. The evening was rounded out by a concert of the popular ENEJ band. The players announced also the start of an auction to raise more money to help kids in Chad. Among Volleyball memorabilia, the racket used by Janowicz as he beat GB star Andy Murray two months ago in Paris will be also auctioned.