Poland’s boys qualified on Sunday for the final round after edging Israel in straight sets to claim their fourth consecutive win in Nitra. In another crucial game Bulgaria beat the home guys of Slovakia 3:2 to move up to second in the standings and is only one step away from making it to the final round as well. 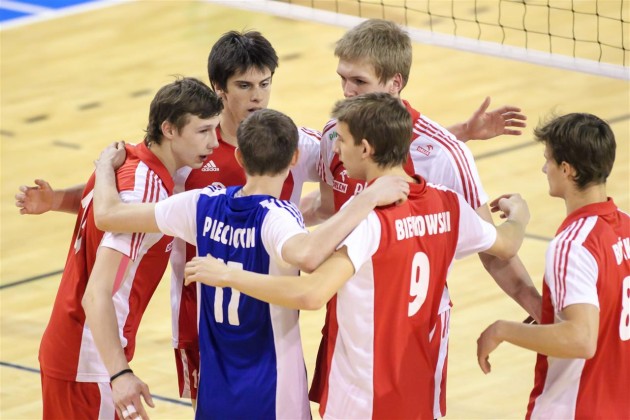 In the opening game of the day Portugal cruised past England 3:1 (23-25, 25-16, 25-23, and 27-25) and collected their first three points in the tournament. England claimed the first set and lead 22:19 in the fourth, but Portugal finally took the victory. “It was a very poor match. Both team made a lot of errors, but I am happy that we won. We will try to win also tomorrow to minimize the damage as we want to finish fourth in the group” said the head coach of team Portugal Ricardo Rocha. “It was a different game than in the last days, because the level of both teams was the same. We have created some chances in this match and we could make it to the tie-break, but we have missed it. We have improved something, but we have to be better in some moments to take the deciding points” added the mentor of team England Rogerio Ponticelli. Dinis Alves from Portugal was the best scorer of the game with 23 points.

In a very important and emotional match Bulgaria edged the home guys of Slovakia in five sets. The Slovak guys started very good and lead 21:13, but Bulgaria came back and turned the match to 2:1 in their favor. Slovakia found a way to play the tie-break and lead 9:7 in the fifth set. Still Bulgaria could lead 14:11, but Slovakia came back to 14 all. But finally the guests seized the game at 16-14 and reached a very important victory. “It was very important for us to win, but are still not qualified. We will have to see what happens tomorrow and I hope Poland will play motivated in the last game of the tournament even though they are already qualified for the final round. Our players showed a lot of character to come back and win this game and I want to thank all members of our team and staff” said the head coach of team Bulgaria Ivan Halachev. “We are disappointed because we were close to reach our goal. We started very well, but we made 25 errors in service in this match and it is more than enough. Our players cried after the match, but we have to come back and fight. We have still one match ahead. We know that it will be very difficult against Poland, but we will do our best” added Slovak head coach Miroslav Palgut. Slovakian spiker Filip Gavenda was the best scorer of the match with 20 points, while Milen Iliev registered 19 for Bulgaria.

In the last match of the session Poland beat Israel easy in straight sets and booked a ticket to the final round. “I am happy that we have reached our goal. We played good today and I used also players from bench in the second part of the match. It was an easy victory for us today” said the head coach of team Poland Wieslaw Czaja. “I think Poland is one of the five best teams in Europe. We are not at this level and we have not the players who can reach this. They beat us by serving and attacking really well. We have our last match against Portugal and it is much more important for us. It is not easy to accept such a big defeat, but that’s sport. I wish all the best to the Polish team” added the mentor of team Israel Jacob Herchko. Poland’s Jan Fornal was the best scorer of the match with 14 points.