Italy cruised past Belarus in straight sets to keep an immaculate record and the top of the charts in Pool A. In the other match of the day Germany edged the hosts of the Czech Republic in straight sets. 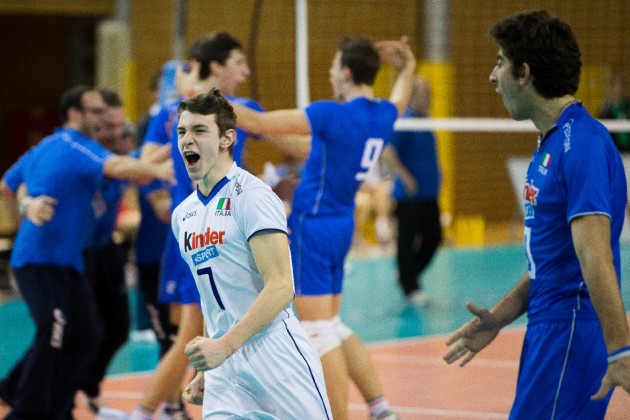 Italy struggled a bit only in the early phases of the third set where it trailed 4:8 but rapidly got back control of the operations leading by four points at the second technical time-out. After losing in straight sets and missing out on the opportunity to make it to the final round of the Championship, the guys from Belarus left the court in tears.

“We are very happy because we have qualified from a strong Pool and this is remarkable. We knew that the guys from Belarus were tired and so tried to impose a quick pace right by the first rallies. I would like to thank my guys for their performance” said Italy’s head coach Andrea Tomasini.

“It feels great especially because our youth national team had missed the final round in the previous edition. I am proud of this group and we will celebrate shortly because we want to finish the tournament with another win on Monday as we play the Czechs in the last match of the competition” added team captain Sebastiano Milan.

“We played three tie-breaks and we performed well in the past days but today we were tired, we lacked quality in reception and the Italians fully exploited our weaknesses. Our aim was certainly to make it to the final round so we are quite disappointed” stressed Belarus mentor Siarhei Konanau.

In the other match of the day Germany edged the hosts of the Czech Republic in straight sets (25-20, 25-20, and 25-12) showing their best performance of the tournament and closing to the Czechs the door to the final round of the European Championship. After losing the first two sets, the home guys practically stopped playing and the game ended in a quick 3:0 for Germany.

“We played good today, especially in serving, and I think the deciding moment was the final section of the second set where we downed our opponents” says Germany’s head coach Matus Kalny.

“We showed a great performance today playing concentrated and this win is well-deserved. I am also happy that I have anchored my team to this victory” adds Germany’s setter Jannis Hopt.

“We thought we could win as we had beaten Germany during our preparations for this event. However, they played really good and we could not stand their quality and pressure. We stopped playing in the third set, so our coach decided to use some other players but it did not change much” concludes Czech team captain Tomas Pavelka.