Norway swept all honors at the traditional “Novotel Cup”. Norway’s men had practically secured the trophy on Saturday by edging Luxembourg. After beating England on Saturday, the home heroines of Luxembourg were still in contention for the trophy but they eventually lost the “final” to Norway in straight sets. 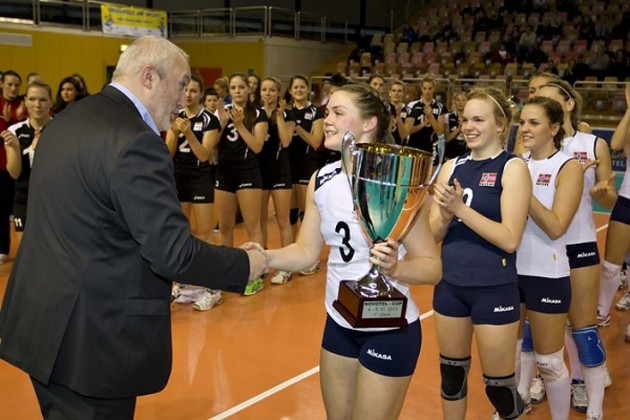 Norway’s men had practically secured the trophy on Saturday by edging Luxembourg but still they remained focused also in their last match of the tournament cruising past England in straight sets (25-14, 25-19, and 25-21) to finish the competition with three wins and only one set conceded to their opponents.

In the last match on schedule for this year’s Novotel Cup the home guys of Luxembourg beat a Czech selection playing under the denomination “West Bohemia” in straight sets (27-25, 25-23 and 25-16) to finish their campaign in second place. However, the start of the game was not that easy for the guys mentored by Burkhard Disch who had opted for a starting six including Gilles Braas, Andy Koenig, Ralf Lentz, Jan Lux, Arnaud Maroldt and Frantisek Vosahlo plus libero Dominik Husi. Luxembourg was trailing by the second technical time-out, so Tim Laeavert replaced Vosahlo and the home heroes eventually flipped the charts round at 19:18; they still went through a very thrilling final rush having eventually the upper hand at 27-25. After that Luxembourg played with more consistency, middle blocker Chris Zuidberg replaced Jan Lux and even though West Bohemia cut the gap, still the home guys went confidently for the final 25-23. The third set was very one-sided with Kamil Rychlicki replacing Koenig and Luxembourg played solid until the final 25-16.

After beating England on Saturday, the home heroines of Luxembourg were still in contention for the trophy but they eventually lost the “final” to Norway in straight sets (15-25, 18-25, and 16-25). Even though the “Lionesses” played well in defense, still Luxembourg could not stand the fast and efficient Volleyball displayed by Norway that quickly pocketed the opening set (15-25). Betty Hoffmann and Nathalie Braas were able to put up a good fight in the second set and the crowd was cheering loudly from the stands as Luxembourg had moved to the front at 18:16. Still, after a time-out, Norway got back on track and via a splendid run could go for the provisional 0:2 (18-25). Luxembourg head coach Detlev Schönberg tried to change the course of the game in the third set via some substitutions with Laura Palgen and Rebekka Klerf replacing Hoffmann and Martine Emeringer, but still the supremacy of Norway was never in danger (16-25).

In the other match of the day England beat their neighbors from Scotland in straight sets (25-17, 25-23, and 25-16) to finish third after claiming their first win in the competition.

Norway’s Mari Aase Hole received the special award named after the late Denitza Krivova – a former player of Luxembourg national team who passed away in a car accident in 2008 – for the best player of the women’s tournament.

The awarding ceremony that rounded out these three days of Volleyball was attended also by the President and Secretary General of Luxembourg Olympic Committee (COSL), André Hoffmann and Marlyse Pauly, who joined the President of the Luxembourg Volleyball Federation, Mr. Guy Erpelding, and Jérôme Lefèvre, Managing Director of Novotel Luxembourg, main sponsor of the event.