In this Wednesday Jastrzebski WEGIEL face at home with PGE Skra Belchatow in the quarterfinal match of the Polish Cup. In the first match played in Belchatow on December 29 Lorenzo Bernardi team won 3-2, but the difference in points is the smallest possible and is 1 (100:99). Read latest volleyball news on Worldofvolley.com. 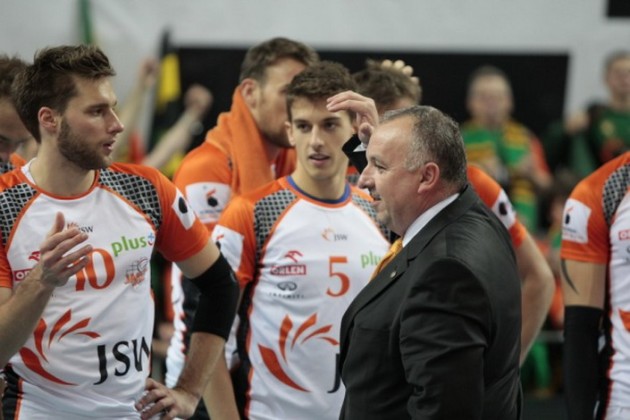 This means that before the second leg Jastrzebski team has virtually no comfort and also has to fight for a second win on aggregate. At stake is the advancement to the final round of the Polish Cup, which this year will be held on 26-27 January. We already know that the winner of match Jastrzębie-Bełchatów face in the semifinals against Zaksa KEDZIERZYN-KOZLE.

Wednesday’s game will be the third in a row for Jastrzebski WEGIEL with the same rival.

“The approach to the fourth match with Skra, knowing that if we won the previous three, the fourth might be easy but it may be fatal. Now it’s all about the next goal that is set before us, and so advance to the finals of the Polish Cup. This meeting will be very heavy” said Damian Wojtaszek, Jastrzębski WEGIEL libero.

In his hall in the season, “Orange” is not lost yet against any Polish team. The only team that managed to win against Jastrzębski WEGIEL is Turkish team Maliy Milli Piyango Ankara, which proved to be better in the CEV Cup. In the national competition Jastrzębski WEGIEL continues excellent winning streak – the team coach Bernardi remains unbeaten in 10 games (eight in the league, two in the Polish Cup)!

“In my career I has never experienced a similar series. It is certainly a nice thing, but it’s better to look ahead, not back. All the time we have to be focused on what we do. The largest value of the winning series is that with each passing game improves our mood and atmosphere in the team. Build a single victory, let alone such a long series, so I think anyone can figure out how we feel, having made ten games in a row won” says the Jastrzebski team libero.