Delecta Bydgoszcz team recently surprised his fans with great games and results. We are a good team, not only on the field but also outside it. We all respect each other, said Delecta Bydgoszcz attacker, Lukasz Owczarz. Read latest volleyball news on Worldofvolley.com. 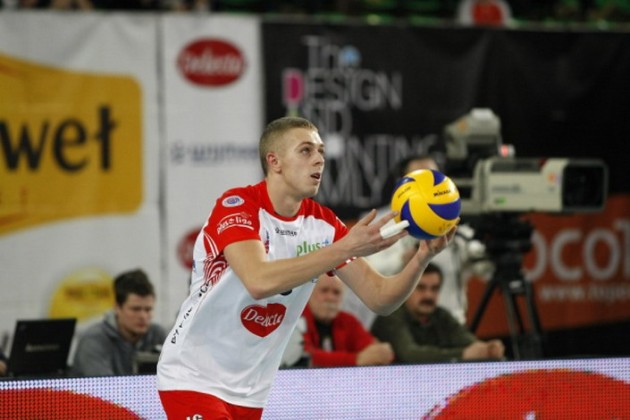 You have not played in the match against PGE Skra on Saturday, although every day you train and play with the Delecta Bydgoszcz first team.

Lukasz Owczarz: “Exactly. During Saturday’s game against Skra Belchatow I not had a chance to play. Every game is a good opportunity to test ourselves and maintain form. We knew that we will have a more difficult meetings, because on the other side of the net are well-known players from the PlusLiga teams. Surely we could have played better. First of all I regret losing the first set, because we had a big chance of winning. Who knows, maybe if we could overcome the results would be quite different. Eventually, we had to recognize the superiority of opponents”.

The first team Delecta Bydgoszcz for a long time plays at the high level. You have a lot of wins in PlusLiga, European competitions, you are in the semifinals of the Polish Cup. Last Saturday you defeated PGE Skra BELCHATOW. In the history of the club from Bydgoszcz do you have such a successful season?

“It’s true. This season is the best of our performance. We all play equally. We are a good team, not only on the field but also outside it. We all respect each other. We have common goals to which we aspire. I think few people expected that after the 15th day of PlusLiga we will be number two. I admit that no one in our team when we started the season thought it would be like that. However, we realize that we must continue to play and win in order to maintain this position and to have an easier start in the play-offs”.

On Wednesday, is waiting for you the next test, but this time in European competition. The 1/8 Challenge Cup against the Moerser SC.

“On Monday, we’re going to Germany, where we will play on Wednesday, the first game in the 1/8 Challenge Cup. All the necessary information about our opponent will be announced to us there on the spot in Moers. We’ll be watching the match and analyze their game in order to properly prepare for the meeting”.

Directly after the meeting in Germany you coming back to Poland. You go straight to Kędzierzyn-Koźle where you will play aginst the table leader.

“After the match with the German team after a few moments of rest awaits us a meeting with the leader of PlusLiga. I hope that after this confrontation will change leader table (laughs). We must now focus firmly to have the best play. And then prepare for the playoffs”.