Poland’s Tauron MKS DABROWA GORNICZA bid farewell to this year’s European Cups by losing 1:3 to Fenerbahce SK ISTANBUL (21-25, 25-21, 19-25, and 20-25) their second match scheduled for the Challenge Round of the 2013 CEV Volleyball Cup. This and other volleyball news read on Worldofvolley.com. 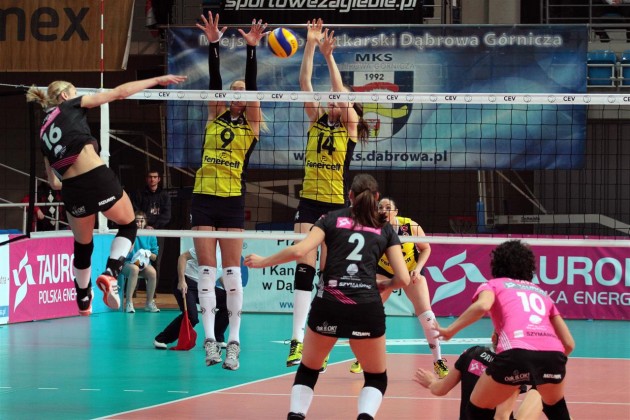 On the other hand, Fenerbahce SK makes it to the semis to play there Russia’s Uralochka-NTMK EKATERINBURG.

The home heroines played much better than they had done one week ago in Istanbul but still it was not enough to stop the march of Turkey’s heavyweight. After a good and even start, the hosts did face some problems to stand the serves of Fenerbahce with Seda Tokatlioglu and Korean star Kim Yeon-Koung definitely standing out in this fundamental and paving the way for the final 25-21.

After Fenerbahce got up 7:4 and 14:10, Tauron MKS fought back to level at 14 all as a result of some substitutions (Katarzyna Zaroslinska replaced Joanna Kaczor while Milena Stacchiotti played as outside hitter). The hosts displayed good reception and moved up 21:19 staying much focused and showing great determination to contribute the provisional 1:1 (25-21).

However, Fenerbahce quickly re-asserted its supremacy in set 3 (6:3, 11:7) with Tokatlioglu, Kim and Brazilian Paula Pequeno on fire. DABROWA GORNICZA could reduce a bit the gap as the score was moved from 19:12 to 20:16 but the hopes of the local fans vanished as Fenerbahce re-gained control of the operations to cruise to the final 25-19.

In the fourth set the score stayed equal up to 12 all before Kim secured a margin of three for her side and Tokatlioglu finished it off with a powerful spike from the right wing.

“It was a difficult game but we are happy now as we can continue our campaign in the CEV Cup” said the Turkish spiker in the end.

“It was a much better performance than a week ago in Istanbul but still it is difficult to play when you make so many mistakes. Congratulations to Fenerbahce and good luck to them for the next stage of the competition” concluded home captain Magdalena Sliwa.

CEV ExCom and Board coming up this weekend in Prague