A series of three youth tournaments was recently organized by Atom Trefl SOPOT in cooperation with Gedania GDANSK, with the last taking place at Ergo Arena, i.e. the venue of all home matches played by the team that recently advanced to the Playoffs 12 of the 2013 CEV Volleyball Champions League – Women. 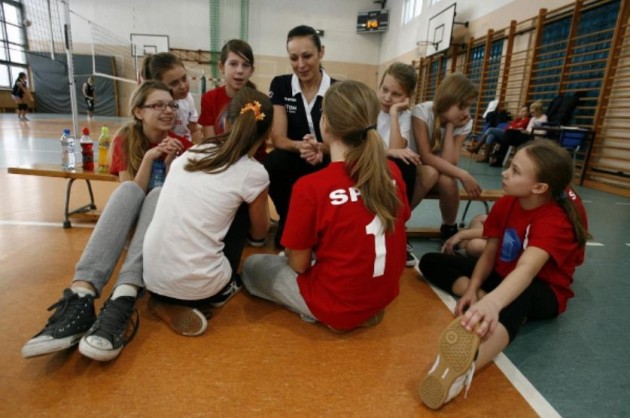 The Championship was eventually claimed by UKS Jasieniak, the team where one of the middle blockers currently included in the roster of Atom Trefl SOPOT started her Volleyball career.

The youth tournament held at Ergo Arena was joined by players born in 2001 and 2002; a total of 146 matches were played by some 120 young players. The games were attended also by one of Poland’s most famous handball players, Marcin Lijewski, who currently plays in Hamburg and got back to Gdansk after competing at the Men’s Handball World Championship in Spain where Poland finished in ninth place.

“My daughter plays Volleyball and I am so happy she decided to take up this sport; this is a much better option than to spend hours playing computer games at home” says Lijewski.

The young participants did show more interests than just Volleyball. “I dance and I also practice some other sports” said a young member of TPS Rumia whose dream is to become a setter.

“Apart from playing Volleyball, I also like horse riding” stresses another pupil of the same group.

“We had a great time and I think that such tournaments shall be organized more often” suggested Paulina and Zuzia from TKS Reda.

“This is a great idea and the more tournaments we stage, the more sportspeople we’ll have in our country” stressed handball star Marcin Lijewski. “The mission of any club shall be to take care of the next generation, to make sure there is a legacy. Today we have seen we have a very talented youth and we now simply have to show the right way for these young players to develop into real sportspeople”.

Gadgets were distributed by Atom Trefl SOPOT to all participants who were also able to ask for the precious advice provided by middle blockers Dorota Pykosz and Sylwia Wojcieska.