After playing friendly matches with Russia’s Khara Morin ULAN-UDE and Germany’s SC POTSDAM, Poland’s champions Atom Trefl SOPOT crossed this past weekend their ways with another team that is set to compete in the first division this year, Siodemka SK Bank Legionovia LEGIONOWO. 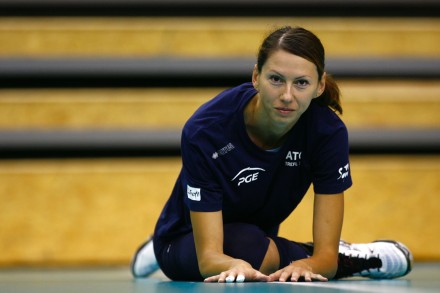 After drawing 2:2 in the first game, Atom Trefl cruised to a 2:0 victory in the second fixture. These were Atom Trefl last matches before the team participates in the annual Three Nations Tournament scheduled for September 20-22 in Karpacz and where Trefl will play Tauron MKS DABROWA GORNICZA, Agel PROSTEJOV (CZE) and SCHWERINER SC (GER), i.e. three teams that are also set to compete in the 2014 CEV Volleyball Champions League starting in late October.

“I could not make any changes because we are still missing five players” Atom Trefl head coach Teun Buijs said. “Taking all this into account for the past few weeks we have focused on tactics, and the players feel heavy legs for they have been working hard also in the gym. They also feel some pain in their arms and show less power as they hit the ball but this is normal at this stage of the preparations” Buijs continued.

Still Anna Podolec and Yuliya Shelukhina were just brilliant in the first game with Siodemka as they scored 19 and 12 points respectively. Libero Mariola Zenik performed well too. Buijs was also satisfied with what he did see at the net as Trefl killed 16 blocks vs. only 5 for their opponents.

The second game was stopped after two sets for Siodemka setter Kinga Bak suffered an injury and could not continue to play. It was nevertheless a very close race with Trefl winning two sets with the same score (25-21).

As for the upcoming tournament in Karpacz, Buijs will most probably be able to count also on Zuzanna Efimienko and Judith Pietersen who are returning to Sopot after completing the 2013 Women’s EuroVolley with their respective national teams (Poland and the Netherlands).