Atom Trefl SOPOT did not lose any set in their last couple of matches in the national league where they routed PGNiG Nafta PILA and Beef Master Budowlani LODZ. Their next opponent – Palac BYDGOSZCZ – seems to be an outsider but the Atomic girls will have to keep focused in order to win the game coming up on Saturday night. 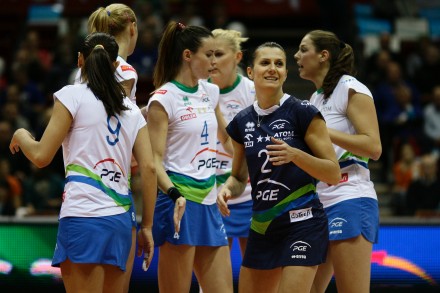 Actually everyone in Sopot is already waiting for the much anticipated Champions League fixture coming up on Tuesday as Trefl plays club world champions and winners of last year’s CL VakifBank ISTANBUL of Turkey. However, the game with Palac is a must win mission for Atom Trefl before Poland’s champions start preparing for their clash with Turkey’s standout.
“Everyone is waiting for the game with VakifBank but this match with Palac is also important and we have to be well prepared for this tie as well” says team captain Izabela Belcik. “On the other hand, it is certainly the next step in our preparations for the clash with VakifBank.”

SOPOT has never lost before to Palac and therefore the Atomic girls will be additionally motivated to prolong that good tradition. However, they will have to stand the challenge brought by Palac young opposite Tamara Kaliszuk, who was the first player to score more than 100 points in this year’s edition of the national league sponsored by ORLEN. Atom has killed 94 block stuffs so far so this means that this fundamental will be crucial in stopping Kaliszuk and in determining the final outcome of the match with Palac.

“It does not really matter who our opponent is. We are hugely motivated for every game and we are always willing to give our best regardless of our opponent and its position in the standing of the national league,” adds Atom Trefl opposite Anna Podolec. “We do not speculate whether they are strong or not. The victory is the only thing that counts and our only goal.”

Resovia fans warming up for next season...