On Saturday Brazil missed out on an opportunity to seize gold even with one round still to go before the Men’s World Grand Champions Cup comes to a close Sunday in Tokyo as the triple World champions could not capitalize on a 2-0 lead in their much anticipated game with Russia. Similarly to what they had done at London 2012, the Russian players stormed back from two sets down to sweep three in a row (20-25, 22-25, 25-21, 25-17, and 15-9) and re-open the fate of the tournament. 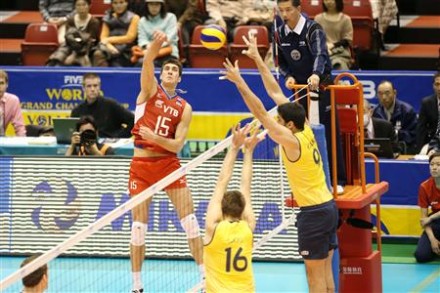 Brazil – who are playing for their third consecutive World Grand Champions Cup title and fourth overall – still top the charts with 10 points but will have to deliver a strong performance on Sunday as they play third-placed Italy to make sure they add another honour to their resume. On the next-to-last day of the tournament at Tokyo Metropolitan Gymnasium Iran opened the programme by upsetting USA 3-2 (28-26, 19-25, 19-25, 27-25, and 18-16) to claim their second victory in the tournament. Italy also bounced back after yesterday’s defeat to USA to rout Team Japan in straight sets (25-16, 25-21, and 25-21) to move up to third place in the standing of the tournament and stay in contention for a medal.

As they are ranked second and third respectively with eight points apiece, Russia and Italy have both a shot at gold. Brazil and Italy will play the first match of the final day on Sunday before USA and Russia prolong their long-lasting rivalry; if Brazil beat Italy 3:0 or 3:1, they will book gold while Russia, USA and Italy would battle for silver and bronze. Hosts Japan will try to finish the tournament on a high note as they round out the programme of the competition by taking on two-time Asian champions Iran.