Italy downed Japan in straight sets (25-16, 25-21, 25-21) at the World Grand Champions Cup on Saturday. The result gives Italy a 2-2 mark, while Japan remains winless at 0-4 heading into the final day of the competition. The match marked the third meeting ever in the World Grand Champions Cup between the nations and 31st overall. Japan entered with a 23-7 advantage in the series. Ivan Zaytsev was the top scorer for Italy with 13 points. Filippo Lanza and Jiri Kovar chipped in with 11 each. Yu Koshikawa had eight points for Japan in the loss. Italy excelled in all facets of the game in an impressive performance. Their defense was especially outstanding in the triumph. Japan appeared flat from the outset and could never muster much of a threat against the Italian attack. 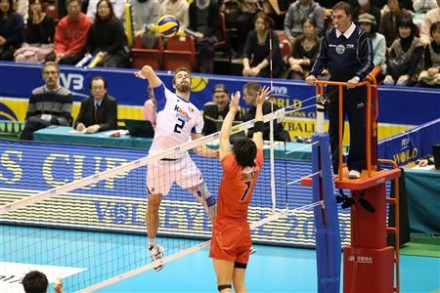 Zaytsev soared for a spike to put Italy up 6-5. Koshikawa fired a serve long and Italy led 8-6 at the first TTO. Shogo Toimoto’s spike pulled Japan within a point at 9-8. Italy moved ahead 14-9 and Japan called a timeout. Japan prevailed in a long rally but still trailed 15-11. Italy was up 16-12 at the second TTO. Japan struggled with receiving during the set as Italy passed well on the counterattack. Lanza gave Italy the seet 25-16 with a spike. Zaytsev and Lanza had five points each in the set.

Jiri Kovar’s block put Italy in front 5-3 in the second set and Japan called a timeout. A spike by Kazuyoshi Yokota made it 7-5. Japan had trouble dealing with Italy’s frontline blocking. Zaytsev’s spike gave Italy an 8-6 edge at the first TTO. Koshikawa sent a serve long and Italy had set point at 24-18. After Japan scored three straight to make it 24-21, Italy called a timeout. Kovar ended the set 25-21 with a spike.

An outstanding block by Thomas Beretta put Italy up 5-3 in the third set. Fukuzawa whiffed on an attempted return and it was 7-3. Ishijima fired a spike long and it was 8-3 Italy at the first TTO. At this point in the match Italy had 10 blocks and Japan had none. A spike by Japan hit the antenna and Italy was up by six at 10-4. Another Zaytsev spike made it 15-10. Kovar’s spike made it 16-11 at the second TTO. Kovar spiked for 22-19 and Italy had the summit in sight. Japan took a final timeout at 23-20. Shimizu sent a spike wide and it was match point for Italy at 24-21. Kovar ended the affair 25-21 with a flying spike.