Nicola Negro was recently appointed to mentor Poland’s vice champions Tauron MKS DABROWA GORNICZA after their long-time head coach Waldemar Kawka resigned following a disastrous start of the 2013/2014 season. Negro has got a very difficult mission to accomplish especially since Kawka was the man steering the team for some 20 years. However, Negro does not feel that much pressure: “I am very proud and happy to be the coach of Tauron MKS. It is an honor for me to be part of this club” he said after his arrival in Poland. 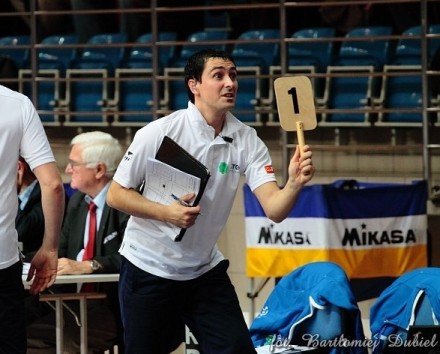 Though he was appointed on Tuesday he first got to meet his players on Saturday for a first training session. “We had quite a good practice and even though we have a lot of things to fix and to improve, I have seen the right attitude and everyone in the team is willing to work hard” he stated.
Negro had a very short time to get to know his players for on Sunday he will already debut at the helm of Tauron MKS in their national league match: “It will be a very special day for me for I will debut with Tauron MKS and it is also going to be my first game as head coach. However, I have already spent many seasons as assistant coach and got the experience to get ready for this. So I do not feel stressed or tense, I would rather say that I feel a lot of positive energy” says the young – 34-year old – Italian coach.
Tauron MKS is also competing in the 2014 CEV DenizBank Volleyball Champions League and has so far recorded one victory and two defeats in Pool F, so potentially it is still in contention for a spot in the Playoffs 12. “I know that it takes time to play good Volleyball so the only thing that we can do right now is to try to play our best and win as many matches as possible” he concludes.