Last year’s bronze medalists Unendo Yamamay BUSTO ARSIZIO could only claim one point in three matches they have played in prelim Pool E of the 2014 CEV DenizBank Volleyball Champions League – Women. They did so as they lost 2-3 to Azeryol BAKU in the opening round before their negative streak continued with another two setbacks as they were up to Prosecco Doc-Imoco CONEGLIANO and Galatasaray Daikin ISTANBUL. Unendo Yamamay will have to change that trend if they still want to make it to the Playoffs 12 and that quest will start on Tuesday as they host Turkey’s standout Galatasaray Daikin ISTANBUL. 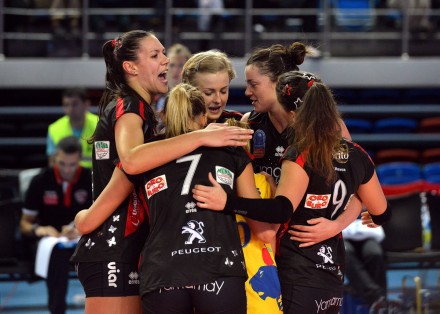 Though they lost in straight sets last Wednesday in Istanbul Unendo Yamamay put up a good fight especially in set 1 and 2. As they play Galatasaray at Palayamamay, the hosts will try to improve on their counter-attacks and serve in order to disrupt the good tactics worked out by Massimo Barbolini, the Italian-born mentor of Galatasaray.
Though they will be missing Dobriana Rabadzhieva, Galatasaray Daikin have already showed their strength with an always outstanding Eleonora Lo Bianco marshalling a wide range of excellent spikers, with Colombian Madelaynne Montano being always the most prolific player to rely on.
The game will prolong the rivalry that dates back to the finals of the 2012 CEV Volleyball Cup where Unendo Yamamay won the title at home after losing the first round in Istanbul, additionally, last March BUSTO ARSIZIO beat Galatasaray in the classification match to crown their first CL appearance with a bronze medal.
Unendo Yamamay head coach Carlo Parisi will be able to count on all of his players but Dutch spiker Lonneke Slöetjes who is still recovering from a shoulder surgery. Marika Bianchini and Serena Ortolani will be the options available for the opposite player, with Ortolani gradually back in shape after she gave birth to her first child last July.
19-year old wing-spiker Ilaria Spirito says: “We do not give up; we are busy with many competitions and we still want to achieve the best we can also in the Champions League. We still can take nine points from the three matches left and even though it is going to be very difficult, everything can happen. We first take on Galatasaray on Tuesday and hope to exploit the always great support by our fans.”