Turkey’s setter Özge Cemberci Kirdar has been playing for Poland’s vice champions Tauron MKS DABROWA GORNICZA for about a month. In the last game she played in the national league sponsored by ORLEN she was voted MVP. 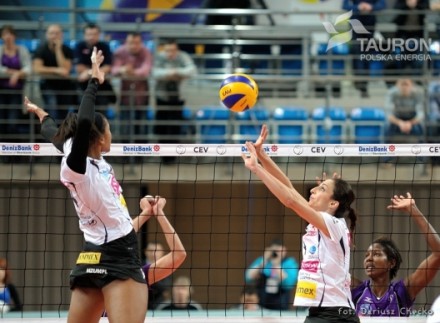 After a disastrous start of the season, Tauron MKS is playing better and better but still makes silly errors.“We have been improving but we still need time. I joined the team four weeks ago and we still have to work a lot to find the right chemistry between setter, opposite and middle blockers. In addition to that, the head coach has changed. Even though I already know Nicola Negro because we have worked together by the time he was the assistant coach of our national team, the other players still need time to adjust to his methods and ideas” Cemberci Kirdar says. “We still need some time to be in our best shape.”

Cemberci scored some points as Tauron MKS beat Siodemka SK LEGIONOWO in the last round of the national league. Though she has won many international awards this was the first time she was voted MVP in a match of the Polish national league. “It was a very important moment for me. I was a little surprised because setters normally do not get that kind of prizes but I was evidently very happy. I would like to thank my teammates as well as the coaching staff, not to forget our fans for their always great support” she says. “They are simply great; they are with us in every game we play and they never stop supporting us no matter what happens during the match.”

As for the upcoming CL game with Russian giant Dinamo KAZAN she says: “It is a very important match for us. We need to be focused from the start up to the end and fight for every point. Dinamo has a very strong opposite, Ekaterina Gamova, but we have a bigger heart and we are ready to fight” she concludes.

Do we need to avoid or limit carbohydrates before game?