Only a few hours after returning back home from Belgium where on Wednesday they beat GENT Dames in straight sets to make a step forward on their way to the Playoffs 12 of the 2014 CEV DenizBank Volleyball Champions League, Atom Trefl SOPOT will play archrivals Tauron MKS DABROWA GORNICZA for the match of the week in the national league sponsored by ORLEN. 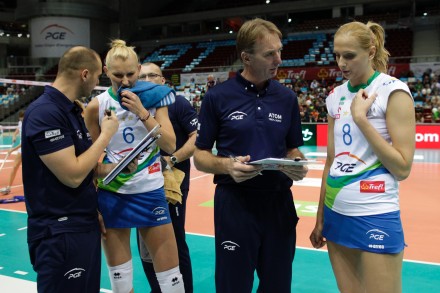 Italian-born head coach Nicola Negro replaced in late November Waldemar Kawka at the helm of Tauron MKS. He previously worked with SOPOT by the time he was the assistant to Alessandro Chiappini for two years where the team won one silver and one gold medal in the national league. Back then Negro worked together with Eleonora Dziekiewicz who is now a member of Tauron MKS.

The Atomic girls are in very high spirits after last Sunday they beat the current leaders of the national league, Chemik POLICE, 3:2 coming back from two sets down. “We had a break of 10 minutes after the second set and I told my players they should calm down, relax, clear their minds and identify the right tactics to beat our opponent. The key thing was to keep cool for the remainder of the match. On top of that, Anna Podolec played a great game and as she joined the actions she brought energy and freshness to the group, so that in the end we were able to win that game” recalls head coach Teun Buijs.

Another reason for a good mood is the away victory the team claimed last Wednesday in Belgium where SOPOT edged GENT Dames to take three points and almost secure their spot in the Playoffs 12 of the 2014 CEV DenizBank Volleyball Champions League – Women. “We are happy with the final score even though the game was not that easy. I think that we were already thinking about the upcoming game with Tauron MKS” says Efimienko. “Luckily everything went fine, we could control the game, keep cool and finish it in three sets.”

Molten and NORCECA to continue their association