Jastzebski Wegiel has triumphed in big derby against PGE Skra Belchatow away! 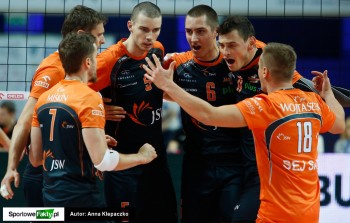 The game was decided after a tie-break in which Zbigniew Bartman and Mateusz Malinowski made difference between teams. Firstly, Bartman brought two points lead for Jasztrebski Wegiel after a strong one-on-one block on Mariusz Wlazly and then with an ace afterward! Away side even reached +3 (12:9), but PGE Skra Belchatow approached on 12:11…

Then Malinowski stepped on the big scene. He performed two strong spikes for 14:11, while at the end players of Skra touched the top of the net while blocking and gave away the 15th point for Jastzebski Wegiel.

The top scorers in the winning side were of course Bartman with 22 points and Malinowski with 18, while Guillaume Quesque made a debut. He came in as a substitute but haven’t made any point for a short time on court.

On the other side Facundo Conte scored 25 points for the reigning champion, while Mariusz Wlazly returned on court after missing several games due to an injury. He was not a starter, but he collected 12 points nevertheless.