CL M: Will the European crown stay in Kazan?

The road to glory ends in Krakow. Will Europe get the new King on Sunday evening? 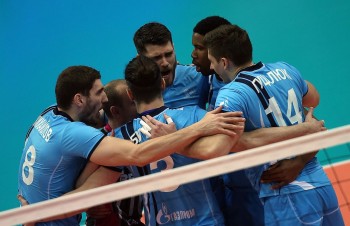 Zenit Kazan have arrived in Poland with a very tough mission in front of them – To defend the European throne against three pretenders – the hosts Asseco Resovia and the Italian duo Lube Civitanova and Diatec Trentino.

Get ready for fierce volleyball battles in Tauron Arena, Krakow. Because, this is the best that Europe has at this moment.

Zenit Kazan – The reigning Kings of Europe. Zenit Kazan have won the 2015 Men’s CEV Champions League, which was their 3rd title in this competition. They have now come to Krakow with one and only goal – To show they are still the best team at the continent.

Also, Zenit will try to continue with Russian domination in the CEV Champions League, as the teams from this country won the last 4 editions of the top European club competition.

Asseco Resovia – The hosts and the reigning vice-champions of Europe! Their clash against Zenit Kazan will be kind of remake of the last year’s finals when the Russian team prevailed in straight sets.

But, this time it will be much different. Because, the game won’t be played on the neutral court in Berlin like last year… This time the battleground will be Tauron Arena in Krakow where Asseco Resovia will have 15.000 people on their side… Will that be enough to dethrone the King?

Diatec Trentino – The champions of Italy! Diatec Trentino have been a regular participant of the CEV Champions League Final Four from 2009 to 2012. And, they have a fantastic overall record of 3 titles and one 3rd place!

Four years later they return to the big scene with a clear goal to reclaim the European throne. On that road Diatec Trentino will firstly have to face their big Italian rivals Lube Civitanova in the semis.

Lube Civitanova – For seven years they have been waiting to finally get back to the Final Four. The Italian giant has changed a lot of world-class players over time, but they simply could not reach the final tournament. Until now…

Lube Civitanova have lost just one single game in their 2015/16 CEV Champions League campaign. Therefore, they are full of optimism before the crucial battles in Krakow. The Italians have already won the CEV Champions League. It was back in 2002… Can they repeat that success in 2016?

CL M: Alexander Butko for WoV – “Kurek is the main weapon of Resovia”

resovia vs zenit i will go with zenit 60-40. thats their chance to win. trentino vs lube i will rate this one 50-50 it depends who’s team woke up in the right side of the bed