Spain followed up on their excellent campaign in preliminary Pool II by edging Belgium 3:1 (25-23, 25-21, 21-25, and 25-16) in the second semifinal to qualify for a European final for the second time in history. Quite significantly Spain’s only other appearance in the last act of a European Championship came in 1992 as the competition also took place in Poland and their opponent in the final was Italy, i.e. the side that the Spaniards will challenge on Sunday in the gold medal match. 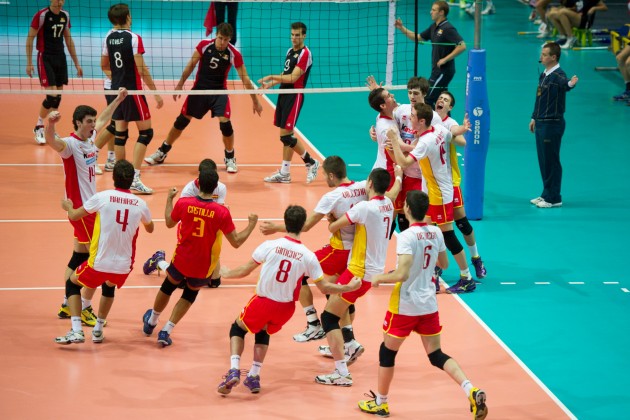 The second semifinal was a much awaited duel opposing the silver medalists from the 2011 FIVB Youth World Championship, Spain, and the real sensation of the tournament, Belgium. If Spain had left a very strong impression by sweeping all of their preliminary matches in Pool II, Belgium had qualified for the semis only after Russia put an end to Poland’s dreams of home glory by taking two sets in their clash that terminated the operations in Pool I on Thursday.

Belgium has never placed higher than seventh (in 2008) in the history of the Championship, so this semifinal appearance was already a great result but nevertheless young head coach Steven Vanmedegael and his guys certainly wanted to go for more. Spain boasts a silver medal from 1992 as their best result in the junior European Champs and this time the group captained by outstanding opposite Andres Villena – by far the best scorer of the tournament – was ready to fight for gold. Belgium, however, imposed their game almost all the way through in the first set, going up 9:5 and even 18:14 before their machine got somehow stuck and Spain flipped the tables around going up 23:22. A time-out did not help Belgium stop that storm and Villena was the man that killed the last attack coming at the end of a positive 5-1 run for the provisional 1:0 in favor of the Spaniards (25-23).
Spain stretched that good momentum also to the early phases of set 2 but Belgium fought their way back to eventually move to the front with an ace by Jonas Reynders (11:10). Supported by a small crew composed exclusively by parents and other relatives, the Belgians imposed once again their play (17:13); three points of margin (20:17) by the time they were entering the final rush were once again not enough for Belgium to finish it off positively, as Spain clawed back vigorously (20 all), some great defense and the omnipresent Villena made it work just fine and the 2:0 was there after an attack killed by the Spanish captain (25-21).

Quite similarly to the previous sections of the game, it was Belgium that caught a flying start in set 3 (8:4) but this time Spain did not wait too long to come back (8:8). Powered by the trio composed by Lecat, Rousseaux and Reynders Belgium piled up a margin of six (21:15). Was this going to be enough to finally bring it home? Only two points (23:19) separated Belgium from what would have been a well-deserved 2:1, and this time Rousseaux took his side by the hand closing it out at 25-21.

Spain stormed out to a 4:1 lead that prompted an early time-out by coach Vanmedegael in set 4 and the “armada” coached by Ricardo Maldonado evidently wanted to finish the job without the risks associated with a tie-break. By displaying solid defense and good offensive solutions, but helped also by the many unforced errors committed by the Belgians, Spain got up 18:11 and did not look back anymore qualifying for their second European final in history on a double block to stop Belgium’s opposite Jonas Reynders (25-16).

ECJ M: Italy’s back for gold after ten years