Zaksa KEDZIERZYN-KOZLE cruised to a speedy and classy win to edge TOURS VB in straight sets in the first round of action for the group that comprises also TRENTINO Diatec and Crvena Zvezda BEOGRAD. Read the latest news from volleyball world on worldofvolley.com. 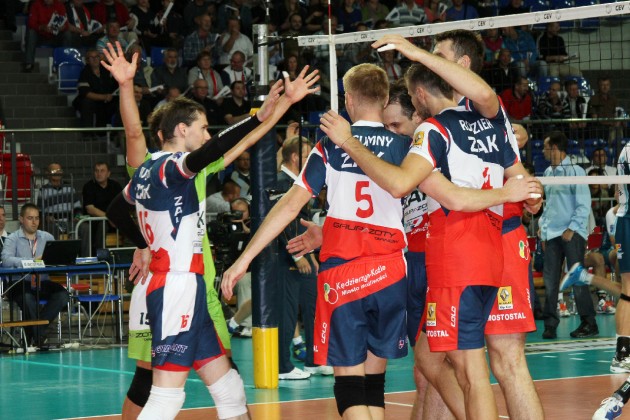 The hosts started with a 4:1 break that forced TOURS VB coach Mauricio Paes into an early time-out. Supported by more than 1’000 fans, the home side went up 8:5 by the first technical break after an attack scored by opposite Antonin Rouzier but TOURS VB did not surrender that quickly and fought back to 10:9 and even drew level at 13 with their Czech star David Konecny. A neck-to-neck race unfolded in the remainder of the set before Zaksa went ahead 22:18 but TOURS VB got back on track with nice actions in defense and the contribution of Marcus Popp (22:21). Konecny leveled the score at 24 all but Rouzier finalized the quest of the home side pocketing the opening set at 26-24.

TOURS VB stepped up in the early phased of the second set (7:5, 11:9, 13:11) but Zaksa flipped the charts around via Brazilian Luis Felipe Marques Fonteles (16:14). Zaksa reduced the mistakes to a minimum, played well also in defense and Rouzier paved the way for the provisional 21:16. The set was eventually sealed by a block of setter Pawel Zagumny (25-19) for a 2:0 lead in favor of the side mentored by Daniel Castellani.

The main attackers of TOURS VB, Marcus Popp and David Konecny, were regularly stopped in set 3 with Zaksa going up 9:5 and gradually imposing its supremacy. The hosts went up 16:10 and 22:14 before closing it out with Rouzier at 25-18 for the final 3:0.

“We fought up to the second half of the second set but after that our opponents sped up and showed a great defense that totally demoralized my players” said Mauricio Paes, the head coach of TOURS VB, after the match.

“I want to thank my players for they displayed a very good performance. It was a difficult match but we showed some good actions and most of all my guys looked very determined” stressed a visibly happy Castellani.

CL M: TRENTINO Diatec ready to fight to for another European crown