CL M: TRENTINO Diatec ready to fight to for another European crown 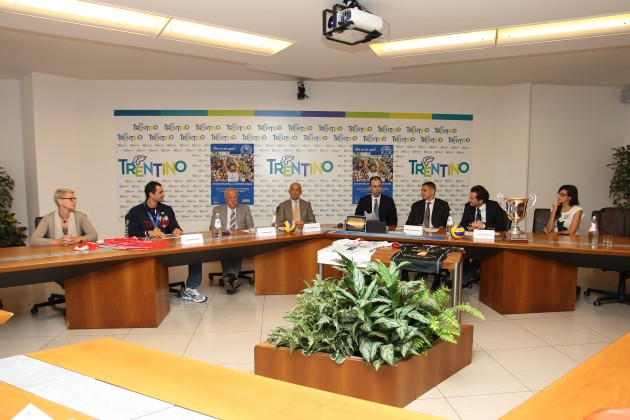 The press conference was hosted in the premises of Trentino Marketing, the marketing agency of the local government that is once again one of the main sponsors of the team. The first match is scheduled for next October 25 against Serbia’s Crvena Zvezda BEOGRAD. The Italian team is going to fight bravely to claim back the trophy lost last year in Lodz against Zenit KAZAN of Russia.

“Our wins are a success not only for the company but for the entire region as well” said Mr. Tiziano Mellarini, Tourism Councilor of the Region Trentino. “This team and its players have become real ambassadors of our region, bringing the icon of Trentino under the spotlight in Europe. So I do wish a good start in the competition with the hope that we can celebrate a fourth victory in a few months”.

“We want to continue claiming great results in Europe, but we also know that in sport everything can change” added club president Diego Mosna. “Our opponents get every year more powerful, but we promise that we will do our best to bring the cup back to Trentino”.

“We are proud and satisfied of this long-lasting partnership because Volleyball and tourism go hand in hand with each other” said Maurizio Rossini, Marketing Director of Trentino Marketing.

Matey Kaziyski and Radostin Stoytchev also attended the conference. “Participating for the fifth year in a row in such an important competition makes me proud” stated the Bulgarian coach. “Everyone’s memories, talking about Champions League, go to these three glorious seasons but I think that also the third place of last year is not to underestimate. The victory in Doha helped us go over the problems and the ghosts of the last month. Every year becomes harder; we absolutely need to be first in the Pool to make it to the Playoffs 12 as we share that ambition with TOURS VB and Zaksa KEDZIERZYN-KOZLE”. “After being stopped in the semifinal last year, we are looking for revenge” said the captain Matey Kaziyski. “We are aware of our skills and we will fight until the end. Surely it will be another great adventure”.

The guys will have a brand new uniform: the colors are the same (white the first one, black and gold the other one) but next to the official Champions League logo will appear three stars, each representing a past victory in the tournament. The media coverage for the home matches of TRENTINO Diatec will be huge.

ITA M: A poster in Perugia that...