PGE Skra Bełchatów prevailed against Espadon Szczecin in Round 27 of the Polish men’s volleyball championship Plus Liga 2017/2018. 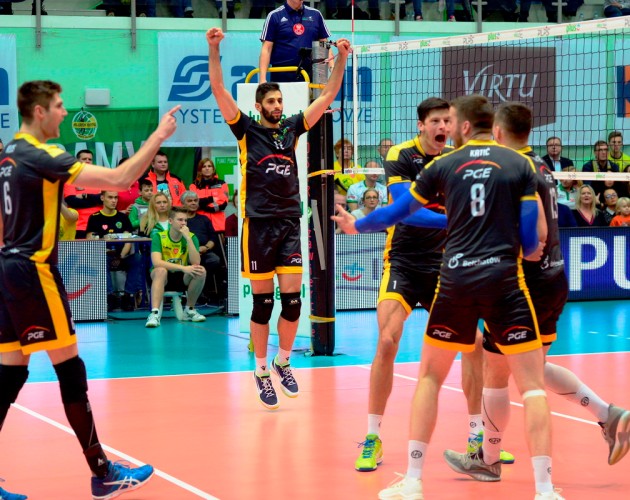 The second-placed Skra beat Espadon in straight sets, partially 25-21, 25-19, 27-25, in their first away match out of four in a row, which they will play in nine days. Thus, Skra kept a seven-point gap compared to the third-placed ONICO Warszawa.

Skra coach Roberto Piazza decided to make several rotations in the line-up to save the strength of his main players for an on-the-road marathon. The captain Mariusz Wlazły, Karol Kłos or Grzegorz Łomacz remained on the bench and were replaced by Marcin Janusz, the Serbian Milan Katić and Patryk Czarnowski.

As for Espadon, three starters that were sidelined in the previous encounter due to injuries have returned to the court: Bartłomiej Kluth, the Finnish Eemi Tervaportti and American Jeffrey Menzel.

The Serbian middle blocker Srećko Lisinac topped Skra with 16 points. Interestingly, neither of them came from blocking. He recorded 79% attack (15/19, blocked once). Kluth and Michał Ruciak scored 14 points apiece for Espadon, while Bartosz Gawryszewski made 4 kill blocks.

KOR M: Jumbos strike back at Skywalkers in great style to tie finals at 1-1