Russia and Slovenia, although already qualified for the final round of the 2013 CEV Youth Volleyball European Championship – Boys, still looked extremely motivated also for the last round of action in Jelgava and they eventually finished their campaign with five and four wins respectively to comfortably top the charts of the Pool. Read latest volleyball news on Worldofvolley.com. 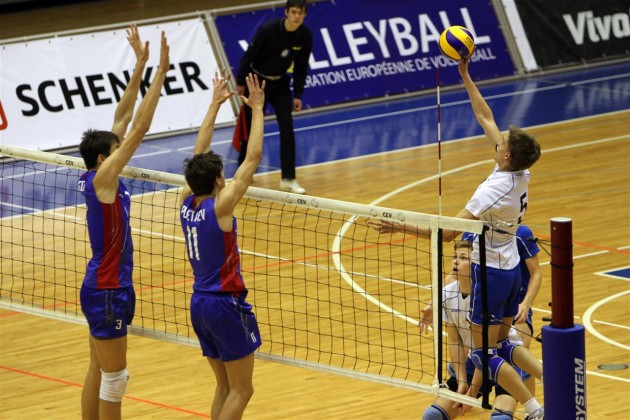 Still Russia conceded their first set in the tournament as they edged Estonia with the score of 3:1 (25-13, 22-25, 25-18, and 25-17). Oliver Orav was once more Estonia’s top scorer with 21 points including 2 aces. Kirill Ursov paced Russia with 15. “We lost the second set because we felt the fatigue from the past days” said Russian mentor Alexander Karikov. “We came to Jelgava this past December 28, so we’re a little tired but I am happy with the result of the match, especially since we had lost to Estonia in five sets some weeks ago at the EEVZA Championships in Tallinn”.

In the last match of the tournament Ukraine beat the hosts of Latvia in straight sets (25-18, 25-21, and 28-26) to finish their campaign in third place. Oleg Plotnytskiy paced the winning side with 17 points while 16 were added by Stanislav Azarov. Aleksandrs Avdejevs registered 14 for Latvia, while Maris Lancmanis, Vlads Smirnovs and Klements Aleksands all chartered 8.

“We did not achieve the results we had expected” said Latvia’s head coach Janis Bomins at the end of a tournament where his side suffered five defeats in as many matches. “We even wanted to make it to the final round but our performance was generally poor. Some weeks ago we had beaten Estonia and Ukraine at the EEVZA Championships and lost to Russia in four sets but there we had another starting six. Our opposite Karlis Levinskis – MVP of the EEVZA Champs – could not play here because of an injury and our second setter Rihards Jablonskis was hospitalized just before the start of the tournament”.

RUS M: Mikhailov – “Belogorie will only...