Poland and Bulgaria will both play in the final round of this year’s CEV Youth Volleyball European Championship – Boys scheduled for April 12-21 in Laktasi (BIH) and Beograd (SRB). This and other volleyball news read on Worldofvolley.com. 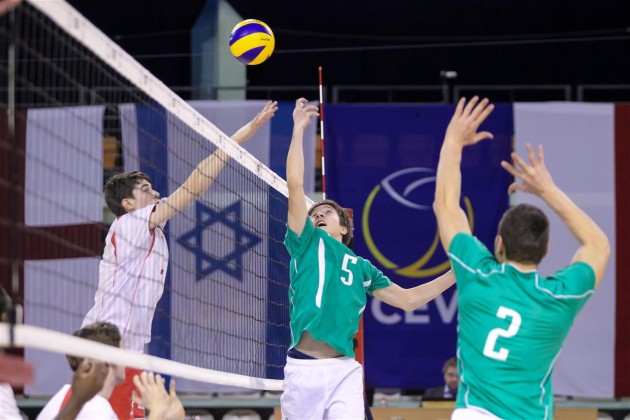 In the opening match of the last day Bulgaria – as expected – demolished England waiting then for the results of the last game starring Poland and Slovakia to know its destiny in the competition. England, on the other hand, after losing five times, finished at the bottom of the standings in the group. “We have a long-term plan with our boys and we expected something like this would happen in this tournament. We need to start to have more training; anyway it was a great competition for us, we had some good moments and we want to improve. The organization of the tournament was perfect and I want to thank the people here in Slovakia and I hope we will come back in the future” said the head coach of the English team Rogerio Ponticelli. “It was mandatory for us to win and now we have to wait for what happens tonight” stressed Bulgarian mentor Ivan Halachev.

In the second game Portugal beat Israel 3:0 (25-23, 25-11, and 25-18) and secured fourth place in the standings while their opponents follow in fifth. “We did what we needed to do. Our players have followed the game plan we had worked out and it was easier than we expected. Israel team was a little bit mentally down and we took advantage of this. Generally I am not very satisfied with this tournament because we have played poorly in the first three matches. I will talk to the players, we have to think about our strategy in training and we will see what we can do in the future” said the head coach of team Portugal Ricardo Rocha. “We came here with the goal to win against England and Portugal, but we have lost last game. Because of that we are half happy and half disappointed. Portugal played much better and I want to congratulate them on this win. It was a long trip, we were twelve days away from home and maybe the players had no power for the last day. I hope that the guys will learn from this tournament and I hope they will become better players in the future” added the mentor of team Israel Jacob Herchko.

In the last match the home heroes of Slovakia knew they needed to beat Poland to make it to the final round of the Championship. Slovakia started out very good and lead 2:1 after the first three sets. However, the Polish guys turned the match around and finally claimed the deciding tie-break with the terrific score of 15-6. The crowd in Nitra and also the home players were disappointed because the local guys were really close to reach their goal. “It was a difficult match but I am happy that we won and finished first in the group” said the head coach of team Poland Wieslaw Czaja. “Of course we are disappointed, because our goal was to finish first or second and get a place for the final round. We played very good Volleyball in Nitra especially in the last match against Poland. Our guys played well, but we are sad” concluded the head coach of team Slovakia Miroslav Palgut.