Russia’s Dinamo MOSCOW caused the first sensation in the Playoffs 12 of the 2013 CEV Volleyball Champions League by claiming their home game with the four-time club world champions of TRENTINO Diatec with the score of 3:2, waiting for the return scheduled for next week in Italy. Read latest volleyball news on Worldofvolley.com. 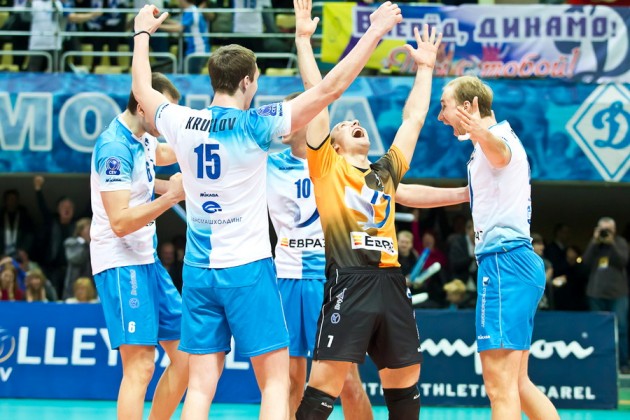 Dinamo caught a perfect start and claimed the first set with a terrific 69% of efficiency in attack. As he was somehow debuting in this year’s European Cups after a long break due to injury, Bartosz Kurek displayed a splendid performance registering 7 points all alone in the opening set. Dinamo stretched that momentum also to the second set thereby claiming a provisional 2:0 lead (25-23).

TRENTINO then got back on track claiming the next two sets with Dinamo’s head coach Yuri Cherednik opting to use his second lines for the late stages of the fourth set as he wanted to rest his standouts for the tie-break. With some 3’000 fans in attendance, Dinamo MOSCOW showed great quality and composure to set the pace in the fifth set by the time teams changed sides of the court (8:6) and by reducing their errors to a minimum, the home heroes cruised to a well-deserved 3:2 win (15-12). Pavel Kruglov top scored in the end with 27 points and 54% of efficiency but it was a very good team performance for Dinamo that was well orchestrated by setter Sergey Grankin. Dinamo travels to Italy knowing that if TRENTINO wins the next match, a golden set will have to be played to determine the side making it to the Playoffs 6.

“I am very proud of my guys who could beat the best team in the world tonight” said Cherednik after the match. “I think that only a few people could believe in our chances to score a win tonight. All players did a superb job and this is a well-deserved win. The rival remains strong and we are expecting a tough match next week in Italy as we are only halfway through”.

CEV CUP F: Another match between MUSZYNA and BIELSKO-BIALA

RUS M: Give this guy some money...