After their friends of the men’s team had achieved that feat on Tuesday, the home heroines of Dinamo KAZAN also advanced to the Playoffs 6 of the 2013 CEV Volleyball Champions League as they were anchored by their superstar Katya Gamova – she registered 40 points all alone in the end – along the way to their second win over the compatriots of Dinamo MOSCOW 3:2. Read latest volleyball news on Worldofvolley.com. 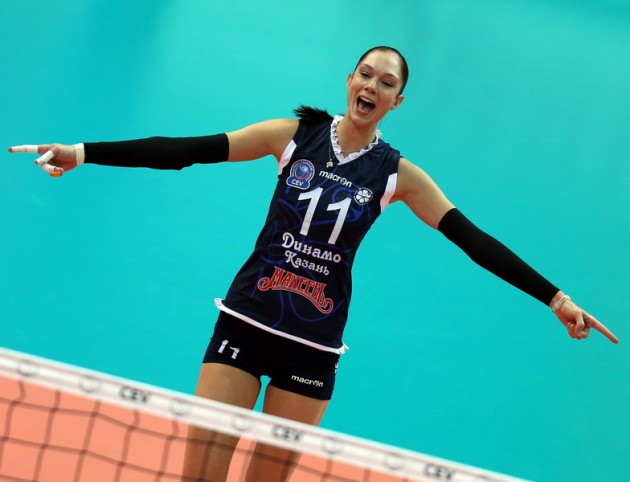 Still it was not easy at all for the local side as Dinamo MOSCOW fought back from two sets down and was very close to call for the golden set.

Right before the start of the game Gamova received a special award for the winner of the contest “Pride of the nation”, but she apparently quickly got the right focus on the game as she definitely wants to claim that much wanted Champions League trophy at the end of this season.

Dinamo moved the score from 5:5 to 10:5 in the first set via a series of good serves by Gamova; however, the guests were standing out in blocking and after two aces by Marina Akulova they went to the front (19:21). Helped by their libero Ekaterina Ulanova (Kabeshova), the Tatars stayed tuned and after a dramatic final rush Dinamo KAZAN could pocket the final 29-27 as Maria Borodakova blocked Maryna Marchenko.

In the second set Dinamo MOSCOW was totally dominated by the hosts who played superbly in defense and went up 15:11 halfway through. With a series of great blocks KAZAN got the right edge and US American Jordan Larson-Burbach aced twice to finish it off at 25-16.

However, the fate of the game was not yet written; Dinamo KAZAN started making mistakes while the Muscovites showed quite many variations in offense, going up 18:10 via three consecutive points by Marchenko before closing it at 16-25.

Dinamo MOSCOW rushed to a terrific 9:1 opening in the fourth set but supported by their fans the Tatars clawed back almost closing the gap (18:19). Larson and Gamova powered that comeback but Nataliya Obmochaeva (Goncharova) was simply unstoppable in the late phases of the set and Dinamo MOSCOW could call for the tie-break (21-25).

The teams fought bravely for every single rally there but it was Gamova who took her side by the hand and paved the way for the final 15-13 whereby Dinamo KAZAN claimed a valuable ticket to the Playoffs 6.

“My players did a great job tonight as they fought until the end” says Dinamo MOSCOW mentor Svetlana Ilic. “Some details eventually determined the fate of the tie-break, our opponents had a little bit more of luck but we definitely showed good Volleyball tonight”.

“We were patient and waited for our chance” stressed home hero Ekaterina Gamova. “Our rival was definitely strong but in the fifth set we showed our character and deservedly won”.