The vice world champions of Rabita BAKU prolonged their winning streak in Europe’s most elitist competition as they cruised past last year’s bronze medalists Dinamo KAZAN in the first round of action scheduled for the Playoffs 6. This and other volleyball news read on Worldofvolley.com. 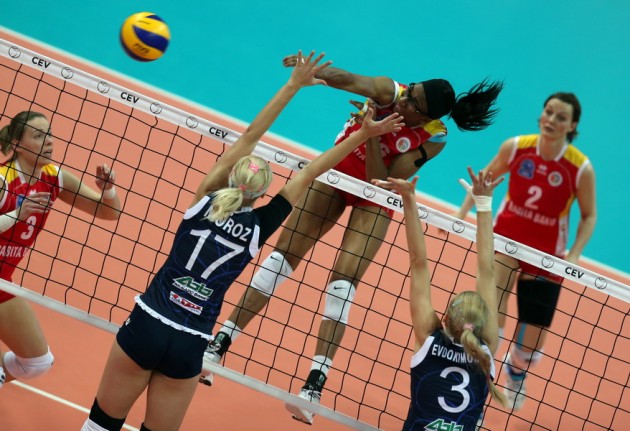 Rabita started out strong and exploited the weakness showed in reception by Lesya Evdokimova; great serving contributed by Aurea Cruz resulted into three consecutive mistakes by the players of Dinamo KAZAN, so that Rabita was up 16:13 by the second technical time-out. Colombian spiker Madelaynne Montano was simply outstanding in offense and her great jump power could help find a way through the tall Russian block. Even the spikes by local superstar Ekaterina Gamova were masterfully neutralized by Rabita libero Brenda Castillo and Rabita could comfortably claim the opening set with the score of 25-19.

Once more Dinamo KAZAN did show some weaknesses in reception also in the early phases of the second set; Rabita moved up to 23:20 but some mistakes by the Azeri heavyweight helped the hosts claw back. Two net violations by Foluke Akinradewo and Montano and other errors ultimately flipped the charts around. With the score standing at 24:23, Dinamo got a set ball that was cashed by Heather Bown with a block.

Dinamo KAZAN did not show good play and the necessary composure also in set 3 being unable to stand the attacks killed by Cruz. A disastrous performance by the backline of the Tatars helped Rabita break away (10:4) and a block by Akinradewo on Gamova moved the score to 20:10. Rabita head coach Marcello Abbondanza decided – a little too early – to substitute some of the players included in the starting six so the Azeri dissipated a good share of their lead (23:19) but that was still enough to bring it home (25-20).

Dinamo KAZAN went for a make or break mission in the fourth set and opened there with a terrific 8:2 run; however, the guests from Azerbaijan did not lose composure and fought their way back to 10 all before Rabita got back control of the operations playing superbly in the final section of this set with Dobriana Rabadzhieva scoring three points in a row to finish it off at 25-21.

“Rabita was simply outstanding in offense and our mistakes were evident” said Dinamo KAZAN head coach Rishat Gilyazutdinov after the game. “We need to adjust our reception for the return game in Azerbaijan. Rabita also scored many points thanks to their serving and we have to find a way to stand this as well. We don’t lapse into despair as we still have a chance to win the return game in Baku and go for the golden set”.

“This match was a real showdown starring two very strong teams” stressed Rabita mentor Marcello Abbondanza. “We played well in defense and all players followed very accurately the tactics that we had agreed upon before the match. This was the key to our success; we made some mistakes too but this is normal and acceptable as you play a strong rival such as Dinamo KAZAN. Last season I lost to Dinamo in the bronze medal match of the final four and tonight I am very happy with the revenge, even more as we scored this win here in Kazan”.