Russia claimed the second edition of the youth international tournament named after legendary player, coach and official Yuri Chesnokov as the 2013 European champions swept all of their matches at “Volley Grad” in Anapa. Russia, Argentina, Mexico, and Poland participated in the Yuri Chesnokov Memorial tournament. 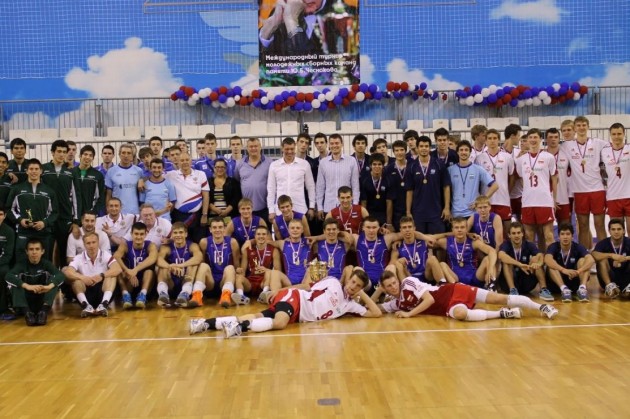 With a real show of strength similar to what they had displayed this past April at the 2013 CEV Youth Volleyball European Championship in Beograd and Laktasi, the Russian golden boys did not concede any set to their opponents. Four (Russia, Argentina, Mexico, and Poland) out of the five teams starring this week in Anapa will be competing at the 2013 FIVB Volleyball Boys’ U19 World Championship slated for June 27-July 7 in Tijuana and Mexicali, Mexico.

“This was already the second edition of this tournament” Russia’s head coach Alexander Karikov comments. “This tournament provided us with an extremely valuable opportunity to prepare for the World Championship. We have tested out the condition of potential rivals there such as Mexico and Poland. It was also very good to have Argentina here for they belong to the pre-favorites of the World Championship. We have collected a lot of information that we will be studying ahead of the World Champs. I am happy with the victory and the results, but this is not what matters the most. The tournament was organized at a very high level and my colleagues from the other teams were happy too with the playing and training conditions, their accommodation and so on.”

WCQ W: Ukraine and Hungary set to fight for top ranks in Lutsk