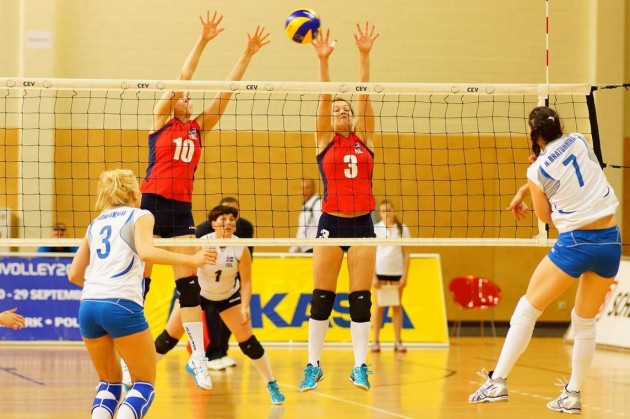 Natalja Bratuhhina – who is also known as Beach Volleyball player – paced Estonia in their winning effort with 16 points, including 7 aces. Three Estonian players – Liis Kullerkann, Elisa Peit and Mari-Liis Graumann – added 6 apiece to the final count. Jona Guolaug Vifgusdottir registered 7 for Iceland and was for the second consecutive day the most prolific scorer of her team.

“In general I am quite satisfied with what my players did today” Iceland’s head coach Matthias Haraldsson commented after the game. “We played a strong team and even though we got only 16 and 15 points in the first two sets, I have seen my players pass well and serve hard. I am happy as they tried their best and fought from start to end. We will try to deliver our best performance on Sunday as we play Latvia. I can’t name any outstanding players because they all would deserve the honor for the best player of the day. The team is our best player” he concluded.

With many fans supporting both sides from the stands, Latvia and Lithuania squared off for the second match of the day. Both teams fought courageously but Latvia eventually cruised past in three sets. Erika Kliokmanaite of Lithuania top scored in this game with 14 points. Lana Sorokina paced Latvia with 13.

“If I compare this match with yesterday’s game with Estonia, I can say that today you have seen a team, yesterday we got individuals on the court” Latvian middle-blocker Agnese Feldmane said. “It was a very good game for us where everything came together. Of course we stepped up the quality of our performance in reception and blocking, fundamentals where yesterday our stats were just horrible. Lithuania came here well prepared and they have a good defense and play good in attack too.” One of Lithuania’s players suffered an injury in the first set but Kliokmanaite took her side by the hand and scored most of the points in their losing effort.