Olympic champions Russia became the third country after Brazil and Italy to win three or more World League titles after an impressive 3-0 win over Brazil in the 2013 FIVB Volleyball World League final. Nikolay Pavlov is a MVP of F6. 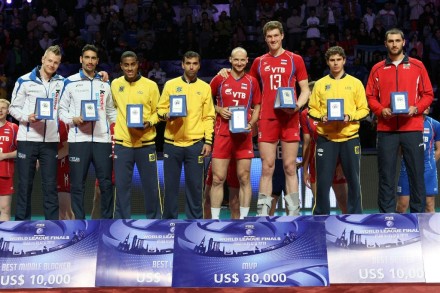 World No. 2 Russia defeated world No. 1 Brazil in a repeat of the Olympic Games final to claim their third World League crown and second in three years having now beaten Brazil three times in succession for only the second time ever.

It is the fourth time that Russia, Brazil and Italy have finished on the World League podium after 1993, 2000 and 2001) but never in this order.

Check the photos from Awarding ceremony in our Galleries.

WL: Spiridonov – “Every point was made of gold”